I’m not sure exactly when my intention to visit In de Vrede took seed. But the buds appeared early September past when the opportunity arose to spend a couple of days travelling overland from London to Amsterdam.

At that moment, I didn’t yet know the name of my destination. But I had heard of a café adjacent to the Abbey of Saint-Sixtus, which brews the Westvleteren Trappist ales, in various beer discussions and podcasts over the years. And I was aware the café was the sole officially blessed retail outlet for those renowned ales.

On my previous trip to Belgium, in 2019 before the Covid lacuna, I’d picked up a bottle of the famed Westvleteren. I found it in Brussels, if I recall correctly; it was an 8, the green one, I’m fairly sure; and it was very enjoyable even after its 9,000 kilometre journey home. How much more so would it be in the shadow of the abbey where it was brewed?

That abbey, and the adjacent café, which I quickly discovered was named In de Vrede (“In Peace”), lies around 5 kilometres north of the town of Poperinge, in the west of Belgium close to the French border. Poperinge was already on the list of places I wanted to visit since my last trip, as it is the heart of Belgian hop country. Everything was falling into line.

So early one Tuesday morning in mid October, I headed from my hotel in Kortrijk to the station to catch the 09:10 train. I had time for a coffee and pain au chocolat from the station coffee shop, which mitigated a little the shock of the almost freezing, dark morning. As usual in Belgium, the train was on time, and in less than an hour I was walking through the streets of Poperinge, now thankfully a few degrees warmer and bathed in sunlight. 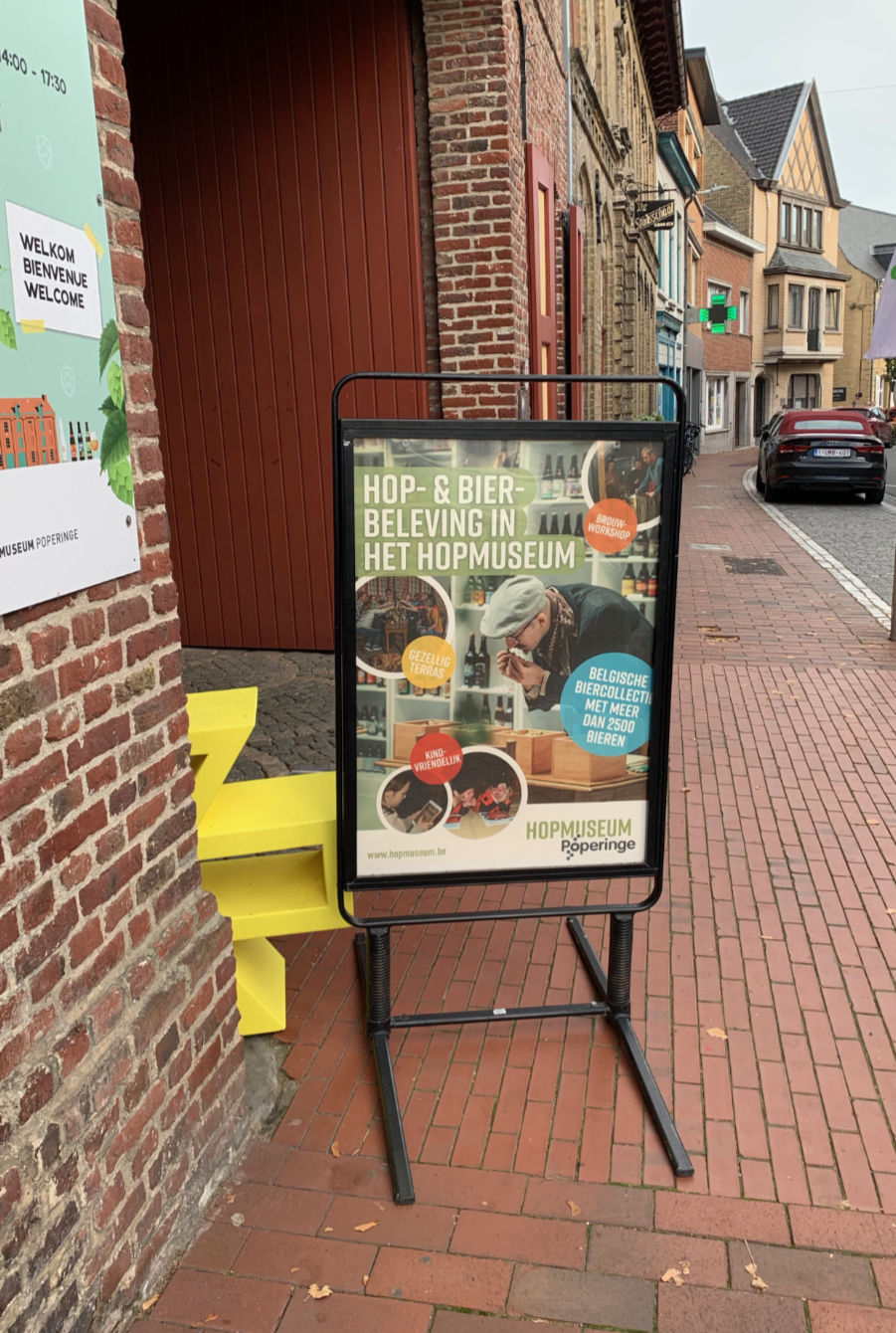 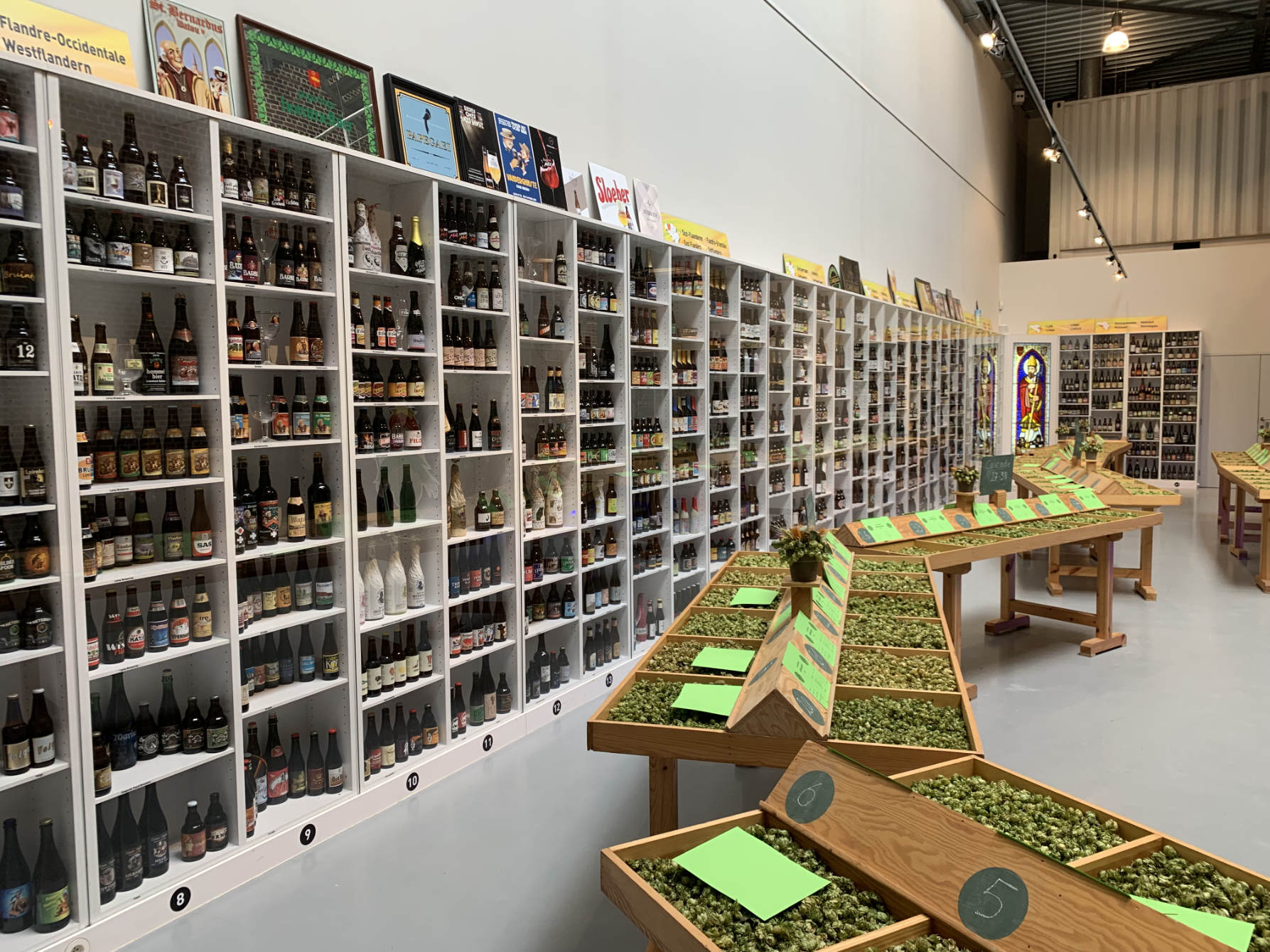 My first stop was the Poperinge Hop Museum. Arriving just after opening, I was the first customer of the day and had the 3 storey covered oast to myself. The museum exhibits cover the early cultural history of hops and their use in beer, along with the commercial and social aspects of hop growing and processing, in addition to providing a detailed look at historical and modern agricultural processes. The social and labour dimensions were perhaps most interesting to me. And the most envy inducing were the many kilos of sticky hops lying there for rubbing and sniffing, together with judging scores, in the final room. I could have put those to good use.

Some time shortly after 11:00, with an eye to lunch at a reasonable hour, and knowing I had 5 kilometres or so to cover before then, I checked the map on my phone and started walking. Poperinge is not a big town, so within 15 minutes I’d gone from main street, through neat and tidy suburbs to the edge of town. Here the well-named Sint-Sixtustraat crossed the town’s ring road and, after passing by a few more detached properties, headed into the countryside. 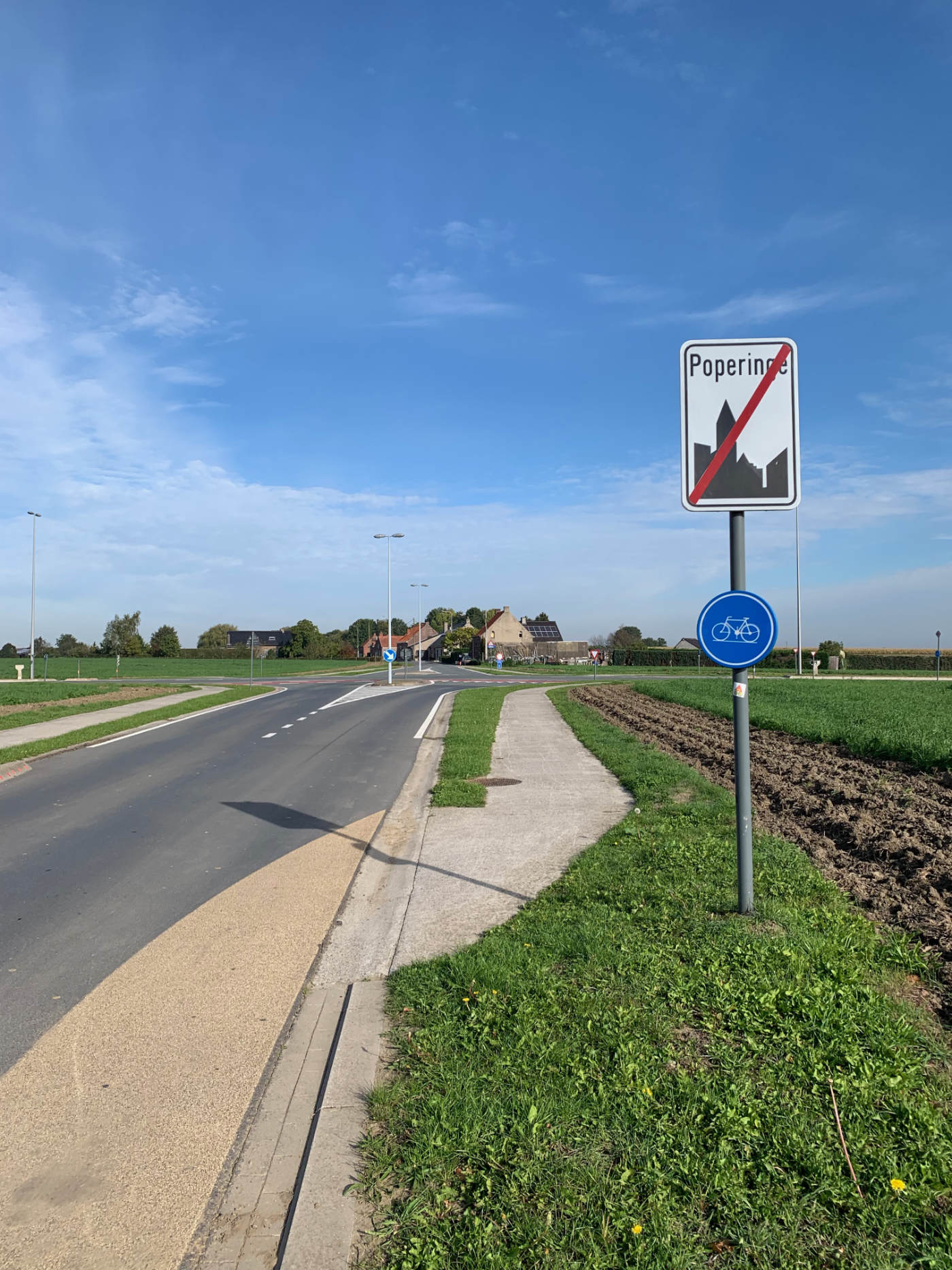 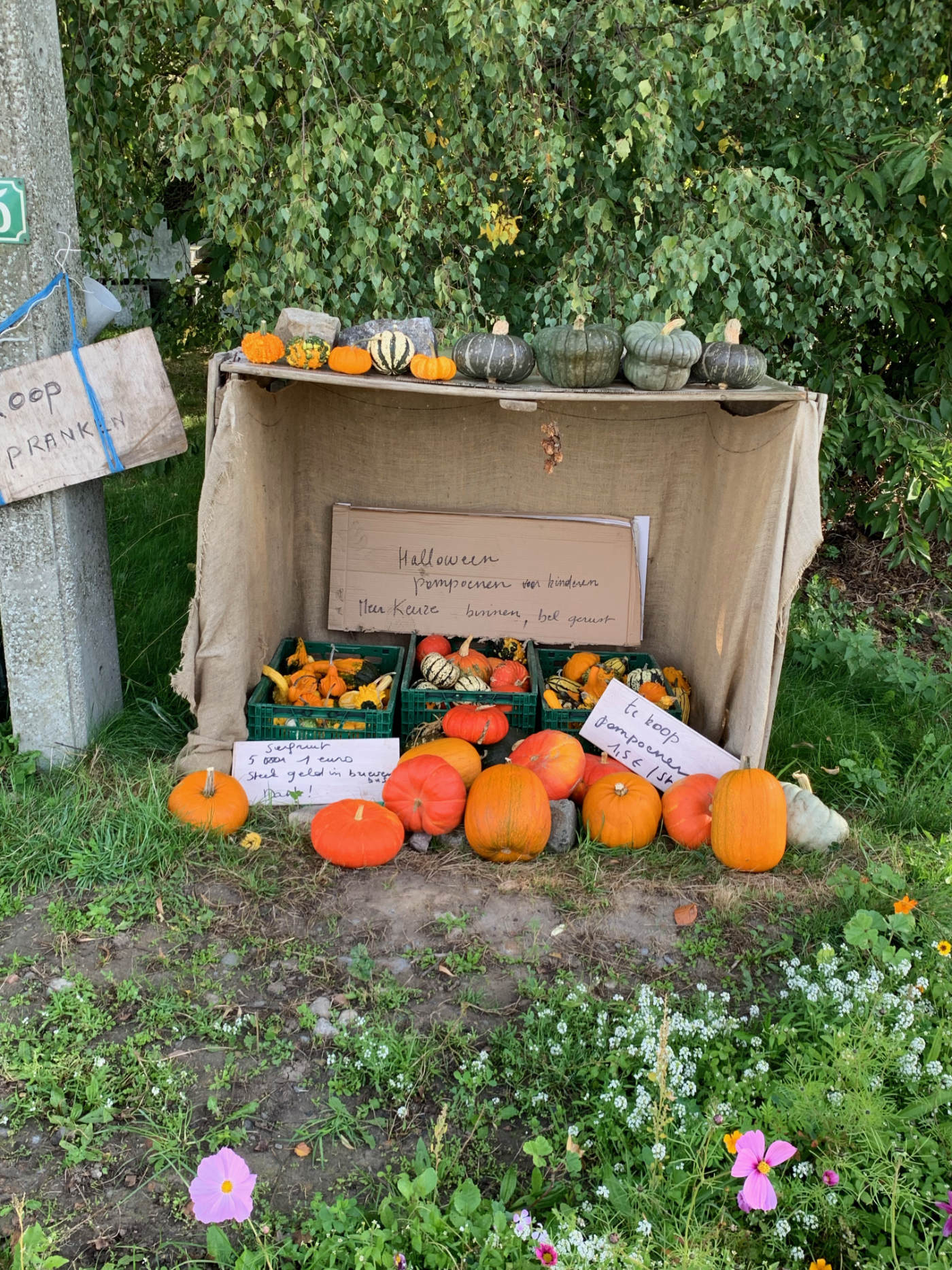 With the sun high in a clear sky, but temperatures in the low teens, the weather was perfect for the increasingly rural ramble. It’s an easy route with only a couple of turnings which are obvious enough (and, of course, GPS makes everything easy these days). Along the way several farms had pumpkins for sale out front (not long till Halloween). The narrow road passed mainly arable land, though there was a busy goose enclosure and a couple of fields of cows along the way too. And hops, of course, or the evidence thereof: three or four substantial farms, identifiable by their poles and wires, though bare now since harvest had recently passed. I did pick a few aging cones from the field edges though, as a memento of the journey. 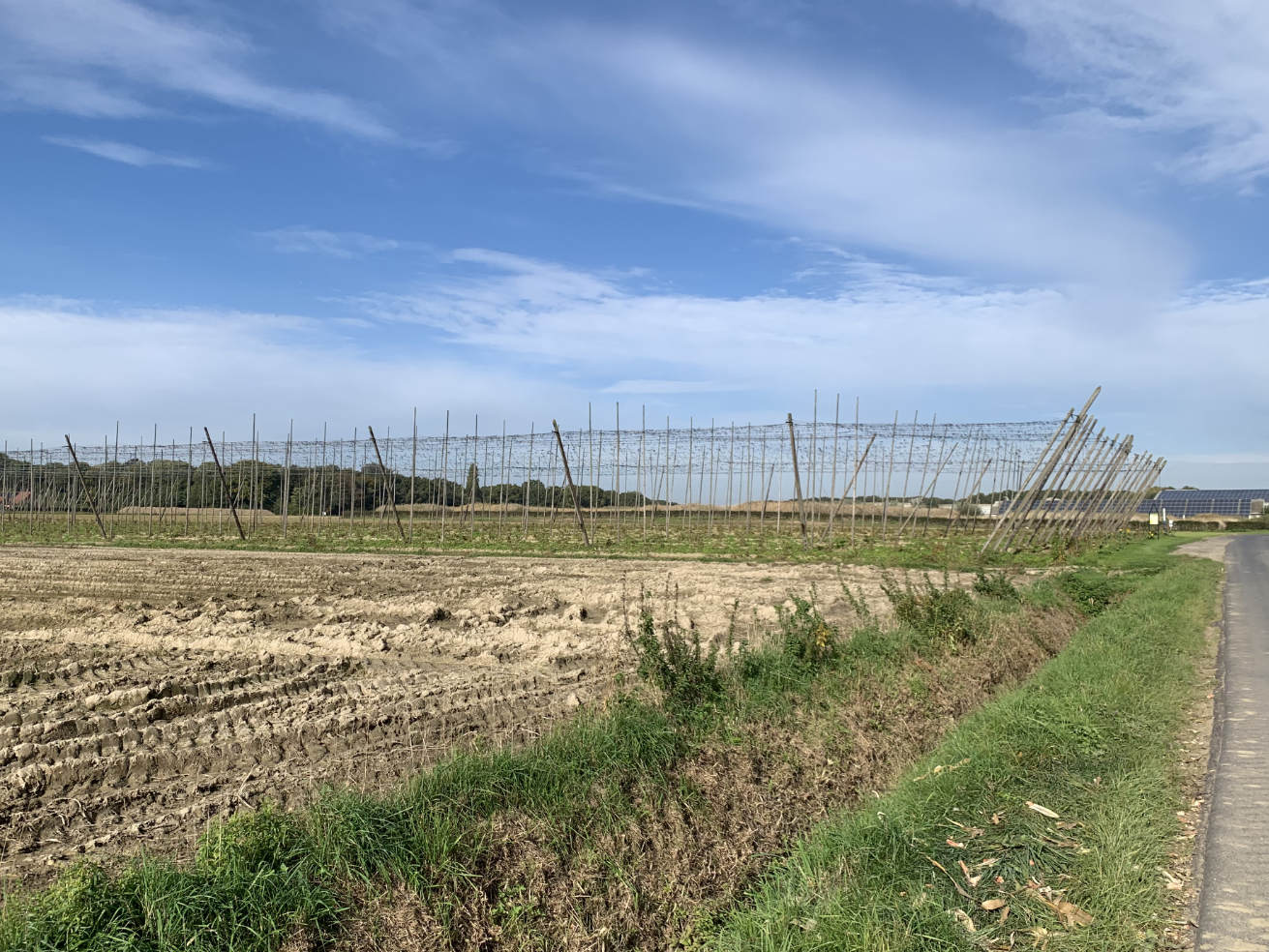 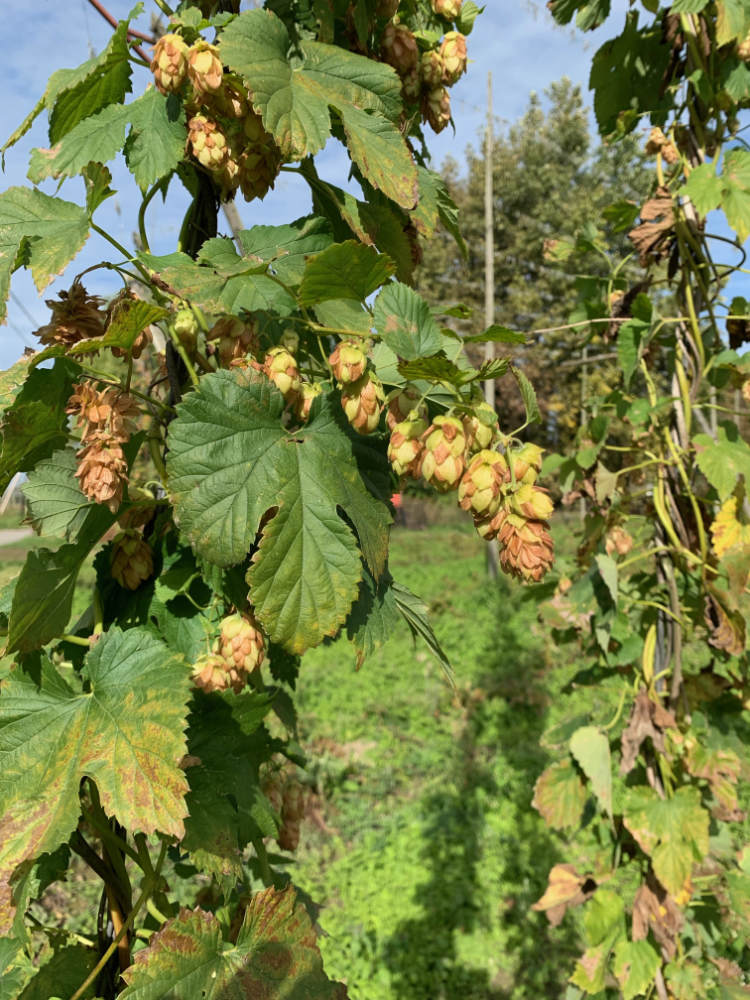 I met a couple of cyclists along the way, and stood aside for a couple of farm vehicles. But, other than that, it was a quiet and refreshing walk. I arrived at the abbey around 12:20. It’s an unprepossessing building, peaceful and low-rise. To one side is the pickup area for those coming to collect cases of beer they have pre-booked online, and just visible behind that some hints of what I took to be the brewery.

By 12:30, though, I was seated at In de Vrede, which is just across the street in its own garden setting. The café was fairly busy, the ambiance laid-back and bright, the low hum of chatter almost reverential. Most people here, one could assume, were primarily drawn by the ale.

And so I browsed the simple but enticing menu, and ordered the burger with abbey cheese (yes - they make cheese too), and a bottle of the Blond ale to go with it (the green top). 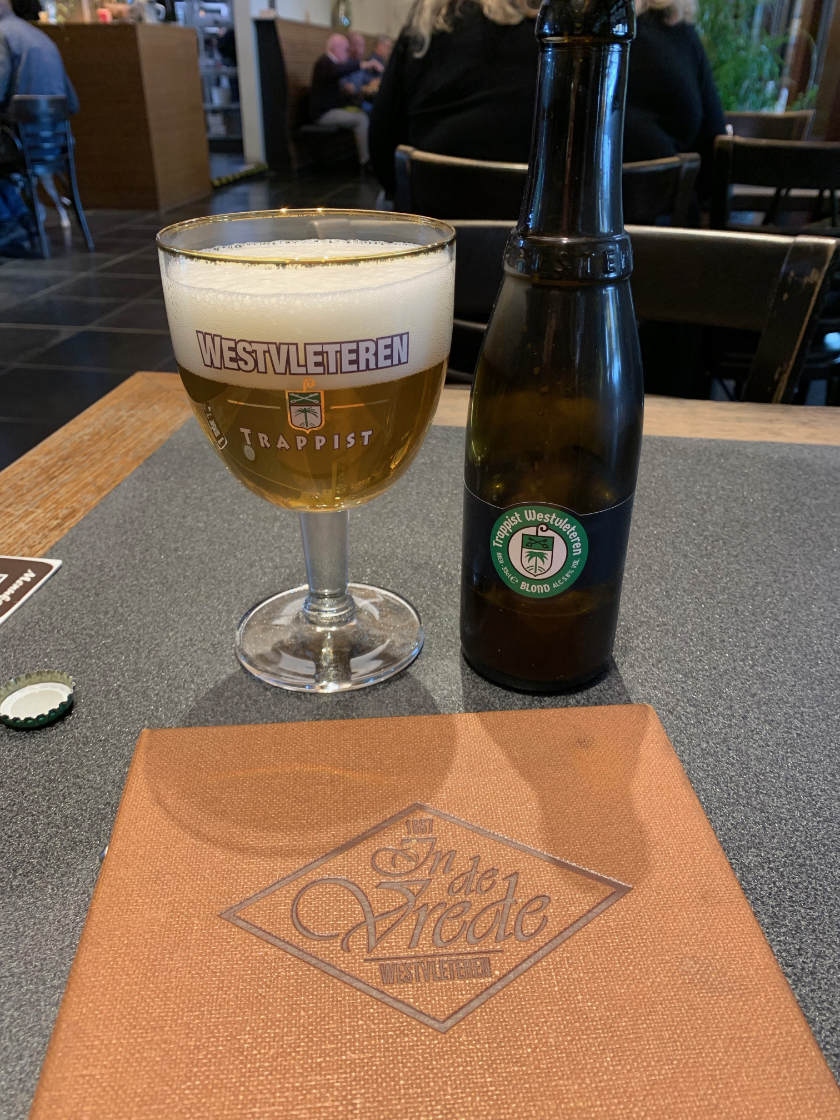 The beer was promptly served, cap loose but on the bottle, with a Westvleteren chalice. I poured and drank. Here are my notes as written then:

Blond with a thick white head. Grass and fruit on the nose. Light body, very heavily carbonated. Bitterness is prominent, fragrant with gentle grass and herbal notes. Extremely easy to drink - especially after the walk.

The burger followed swiftly, though there was hardly a drop of the beer left by then. That too was excellent - very well cooked, on a fresh seeded bun, with a very creamy cheese. And, this being Belgium, a side of fries with mayonnaise and mustard. 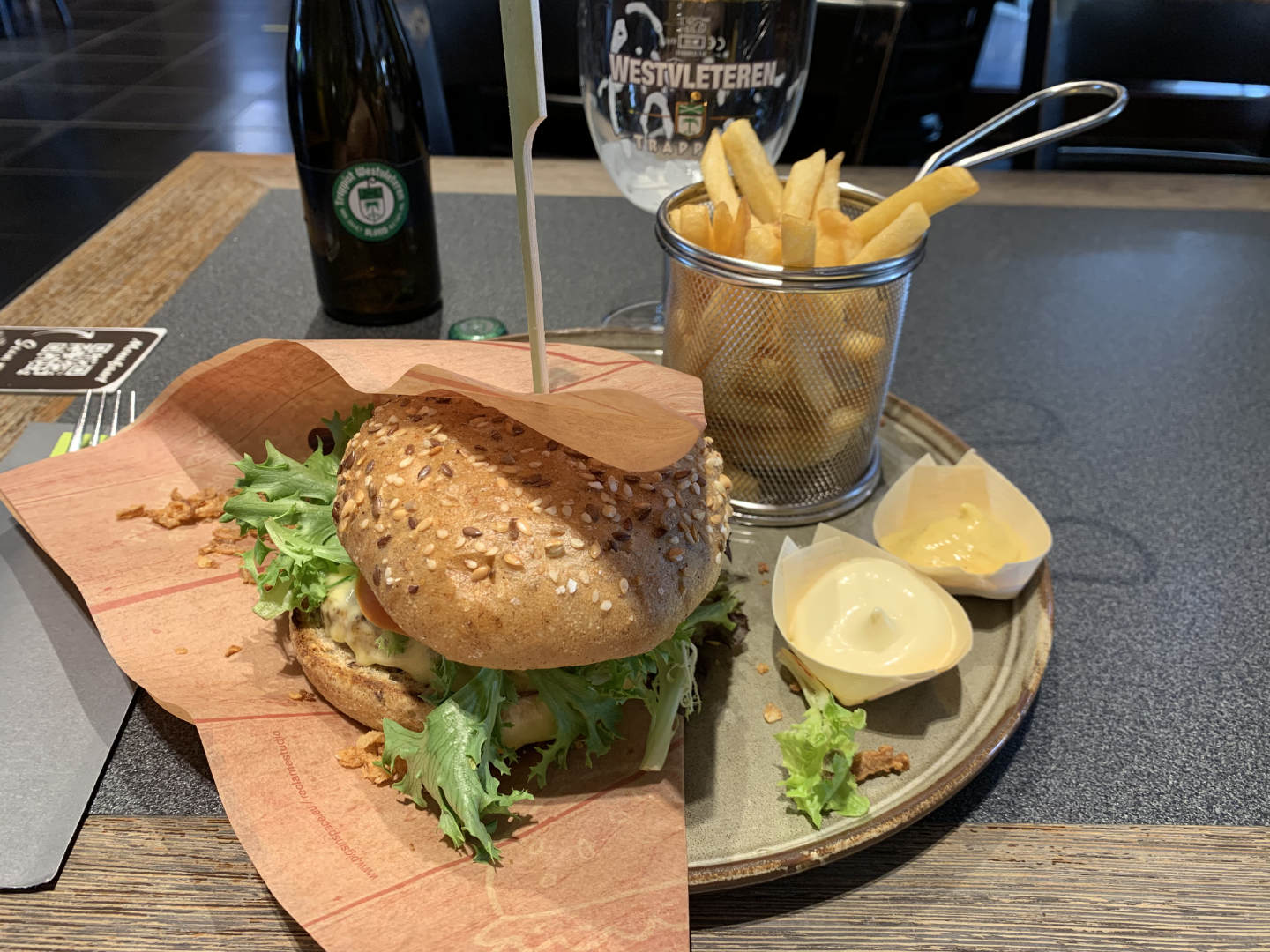 For desert? Well, it had to be the 12 (yellow top). Again, my notes from the moment:

Deep brown, almost opaque. On the noose booze, but then some darker fruits - dates or prunes, a hint of fig and some sweetness. The body is light and medium carbonated. Floods the mouth with booze and as the carbonation explodes flavours of red wine and blackberries and cherries and rich fruit cake tumble over the tongue ending in a boozy faintly citric bitterness. A taste journey which craves a replay. 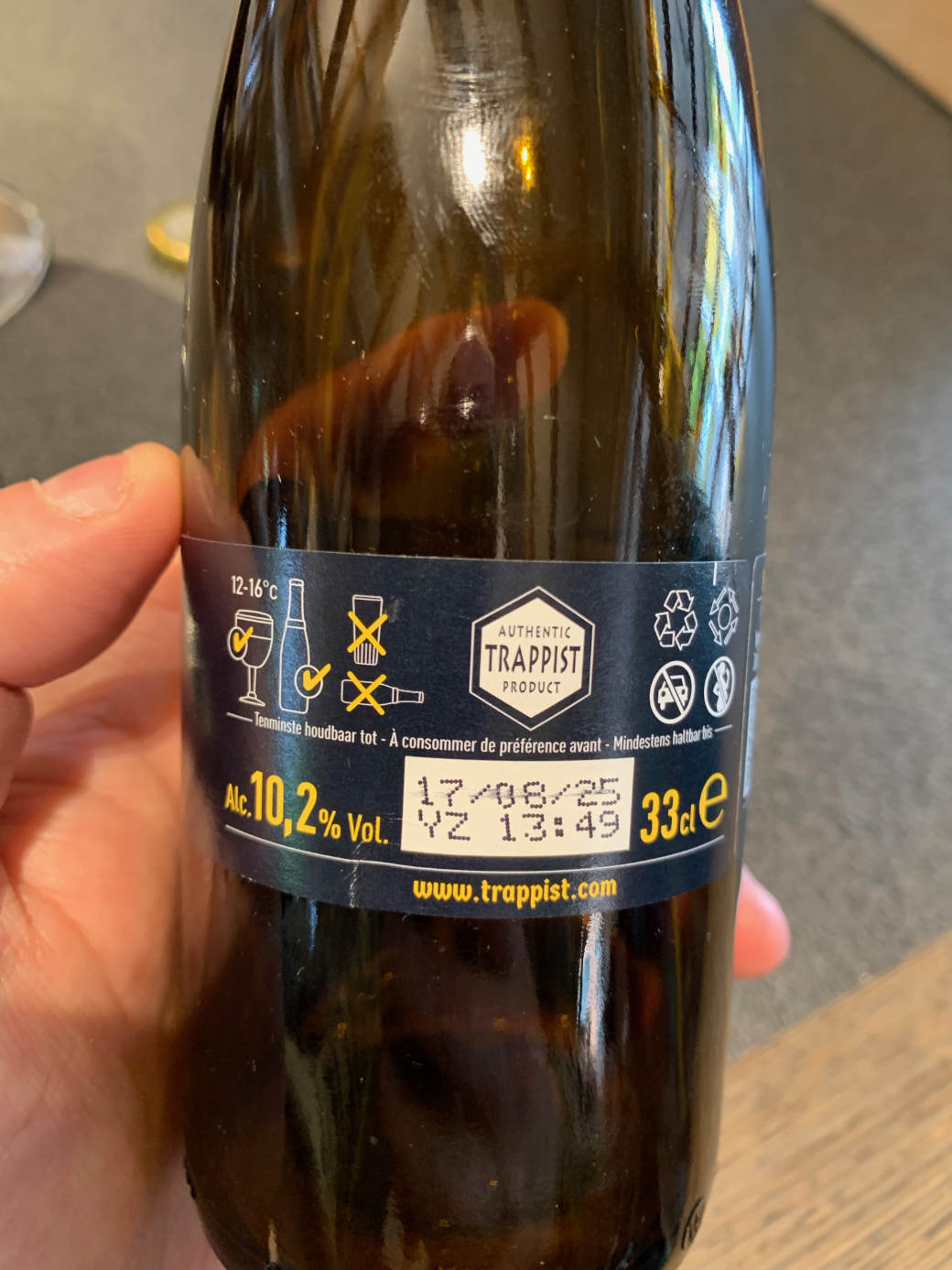 Naturally, I would have loved to stay longer. But with more walking ahead, and plans to stop off at Ypres on the journey back to Kortrijk, I took care of the bill and, after a brief look around the adjacent shop (sadly I wasn’t in a position to carry boxes of beer back), set off towards town.

The walk back to Poperinge passed quickly enough, buoyed by the buzz of strong ale. But by the time I reached the train station, the lunch time booze and surprisingly intense sun had left me with quite a thirst. With 20 minutes or so before my train, I slipped into the adjacent bar, the Moustache. I ordered a glass of their draft lager, Bavik Super Pils. Bitter, crisp and very refreshing, it was a simple beer but very well executed, and just what I needed. 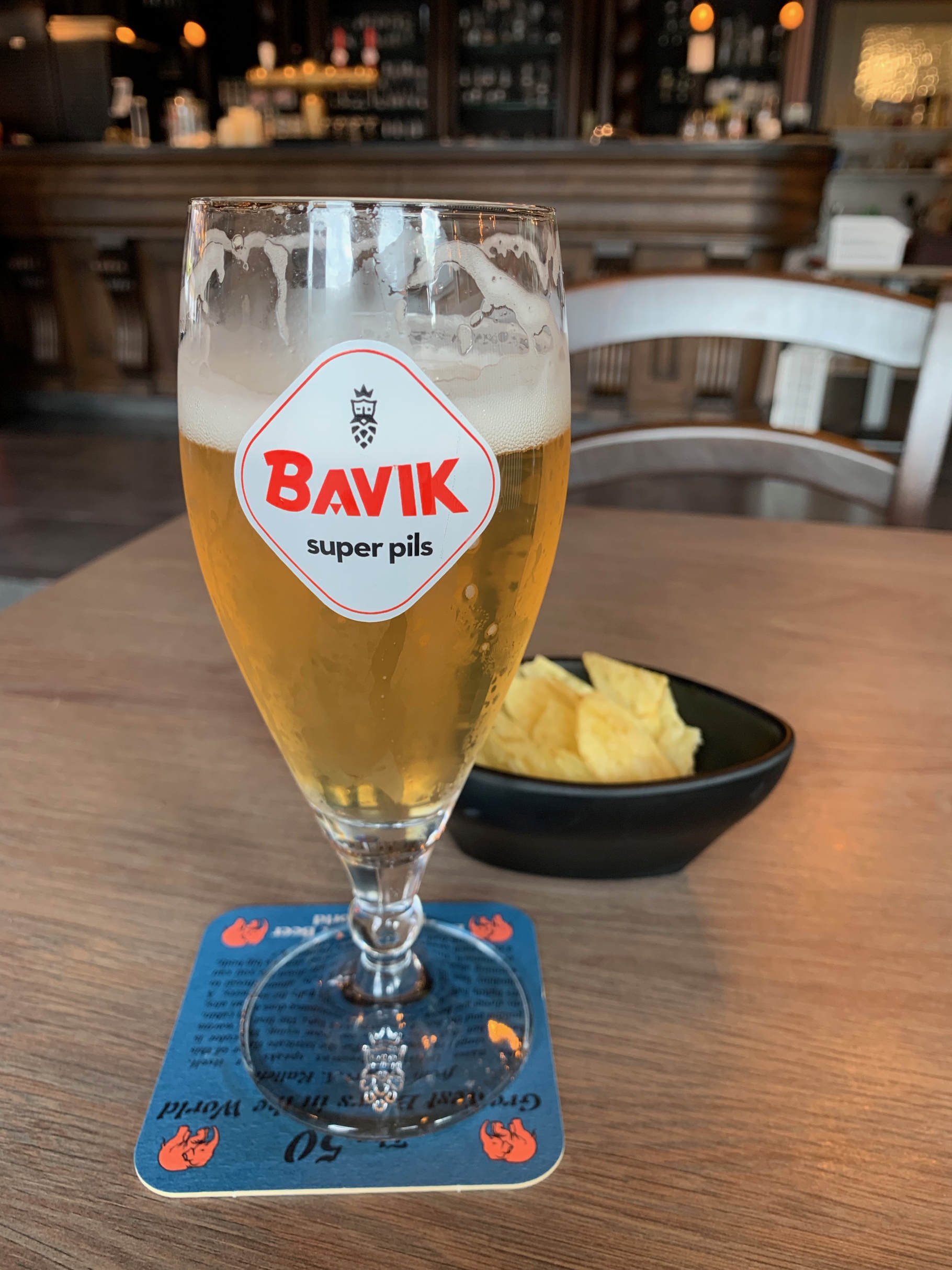 As the alcohol collided with my tiredness from a morning of walking and exploring, I watched the proprietor in animated conversation with the sole table of guests, his black handlebar whiskers protruding well beyond his rotund cheeks. I was transfixed - by the details of the local scene before me, by gratitude for the opportunity be travelling once again after such a lengthy hiatus, by the beery joy of my day so far. Belgium really is a beer lover’s country, never failing to deliver, from the rarefied heights of Trappist ales to lager perfection in a station bar. My empty glass, and a glance at my watch brought my mind back to the present just in time. I settled my bill, walked the few metres to the platform and boarded my train.