When I’m not obsessing about yeast, bacteria and their products, I’m normally engrossed in code and software design. That’s the day job which pays for the yeast ranching. But over the last couple of months, the two strands of my life have been coming together. The work I normally do has largely dried up. And instead I’ve been focussing my code skills almost entirely on a brewing-related product - supported by my amazing co-workers (now also cast adrift on the sea of unknown).

This is a project which traces its story back to October last year. I’d just finished kegging and fast-carbonating a bitter. I was about to add it to the chalk board which sits next to my beer fridge in the basement. And, as usual, I didn’t have the details to hand - hops, abv. Easily solved with a run upstairs to check my notes and the recipe in Brewer’s Friend. But, back in the basement, I noticed that the last brew I’d bottled wasn’t on there either…

I love my old chalk board. But it suffers from a few weaknesses. It requires data from elsewhere, which typically means running around the house. This means it doesn’t always get updated in the general busyness of brewing and packaging. So the first problem is that it isn’t always up to date - and, related to that, I don’t always know if its up to date or not.

The second problem is that it’s often not there when I want it. I live in a house, not a bar. While I keep the chalk board next to my fridge and kegs in the basement (as a necessary point of reference), I’m normally sitting elsewhere as I share brews with friends and family (at least before the current situation - and hopefully again in future). The board’s not there when I want to ask what they would like next, or for reference when we’re talking beer. It’s also not available when I’m sipping a coffee in town idly thinking about what I should brew next - and wanting to review what I have in stock. 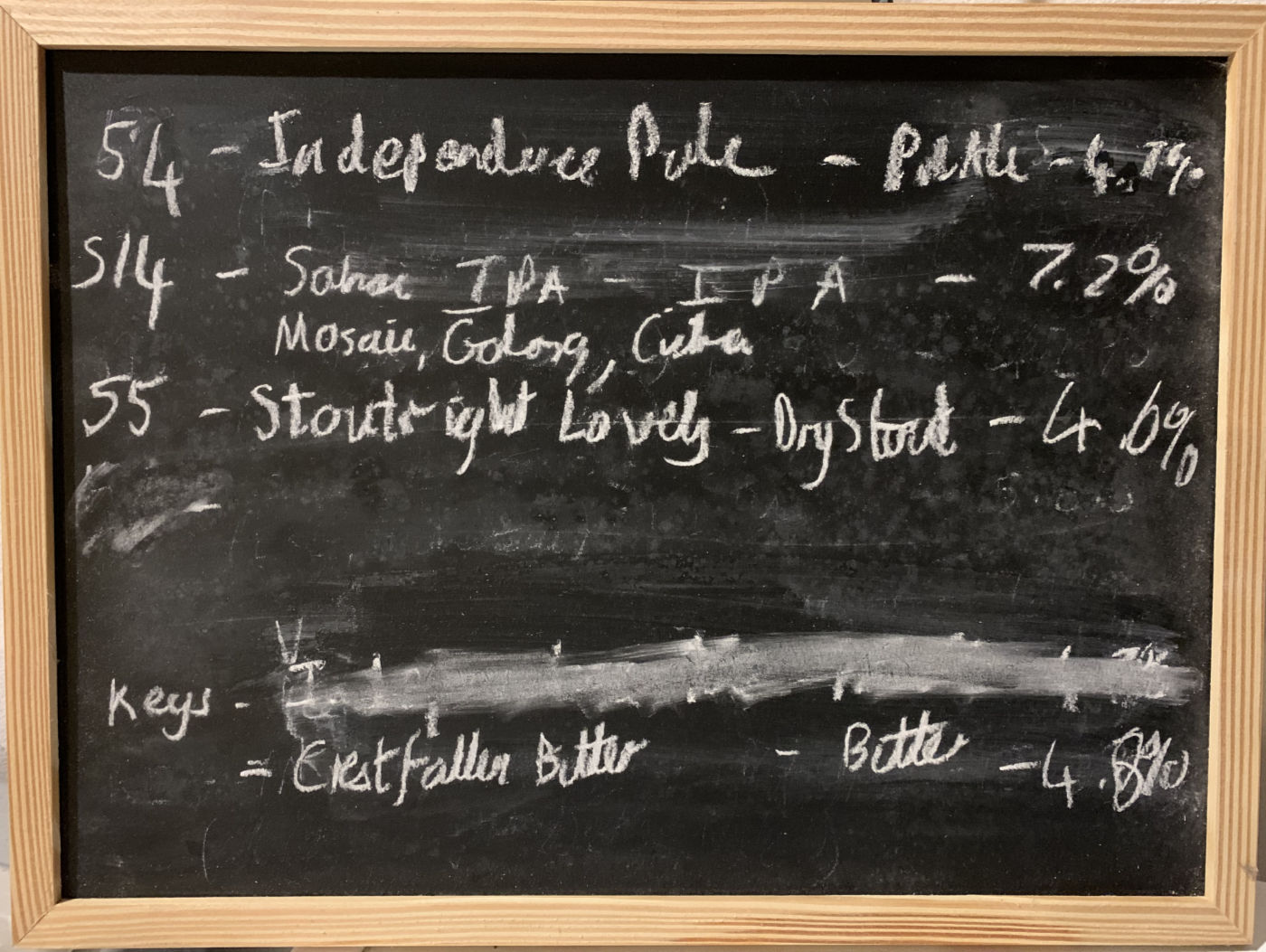 Finally, my handwriting isn’t that great. I probably can’t blame the board for this, strictly speaking. But, anyway, things aren’t always legible to visitors. Or the brewer.

I’m not sure if it was immediately after kegging that bitter, or perhaps on the next brew day, but I was showering off brewery grime when it struck me that I’d like the brew board to be right in my pocket. And I realised I could grab the brew details straight from Brewer’s Friend’s API easily enough. Whatever the timing, I was excited enough by this that I sat down that Sunday evening and hacked out a very rough version. By bed time I had my brew board in my hand on my phone.

However crude that first cut was, I felt there was something in it. I added a QR code to the brew board so I could share it to my brew/drinking buddies with a quick scan of my phone screen. Now we all had our own copy to look at.

And that’s how all this began. I took what I had into the office, and over subsequent months my colleagues helped me flesh out some of the design and details - and we gradually realised that there was some potential in this. Since the world started falling apart here in early March, we’ve doubled down on getting this ready for putting out there. And we’re looking to introduce BrewBoard.app really soon. (If you go there you can sign up to be notified as soon as we launch - or maybe we’ll be open for business by the time you visit. You can also follow along on Instagram too).

Personally, I’ve been using this since last October (my chalk board is like a museum piece - maybe I should just update it from my BrewBoard). At the end of my brew day, I pull up my BrewBoard, select add a brew, then select the brew to add from Brewer’s Friend. If necessary I update the original gravity. And I mark the brew as Coming Soon. A week or two later, after packaging, I switch the brew from Coming Soon to Available Now, maybe updating the Final Gravity and ABV in the process.

So now I’ve got an up-to-date, accurate, shareable BrewBoard. My friends know what’s on tap, and what’s coming soon. They can even look at the recipes for the brews. And it’s in my pocket all the time.

Anyway, that’s how I’ve been keeping sanity during lockdown. Looking forward to sharing it with brewers everywhere very soon.

We’ve so many cool things to add to this in the coming months. Let’s take the chalk board to a new level!

1 comments so far. Add your voice above.

Have been a follower of Sucking Stones BrewBoard since it came into existence. This is a great idea, and I love the logo. Can’t wait for it to go live.