For a couple of months every year, my lawn-mowing task begins, or is interrupted by, the backbreaking work of picking up krathon fruit (known - if know at all - as santol in English) which the tree in front of our house liberally sprinkles around. She’s an old tree, and those fruits really don’t taste too good. They’d be almost bearable pickled - but we’re talking about thousands of apple-sized globes per season. I end up dumping them in a pile in a corner of the garden to rot.

There’s always a small pang of guilt at the waste. Particularly given the amount - and the unavoidable fact that removing the fruit takes up far more time and energy than actually mowing the damn lawn. Today, I decided I’d seek some application for these poor fruit.

So, on a whim, I gathered a dozen not-too-bruised specimens and took them in the house. They sat in a stainless steel bowl while laziness almost pushed the abort mission button. Somehow, though, I found myself sat at a table, with three bowls before me, and a podcast playing in the background. I took a fruit from one bowl, peeled and discarded its skin in a second, and slung it’s lightly chopped pith and luscious nuts in a third. 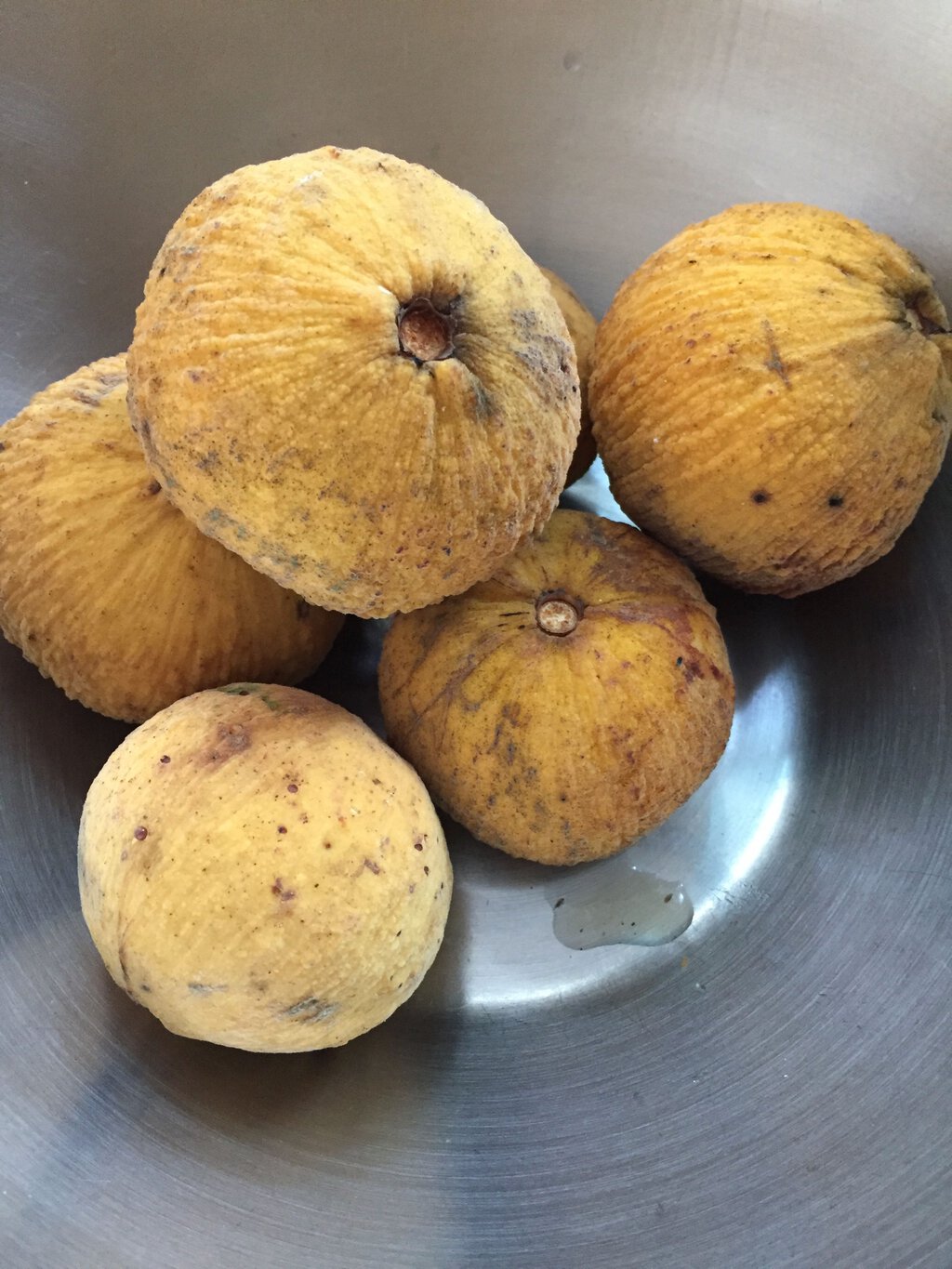 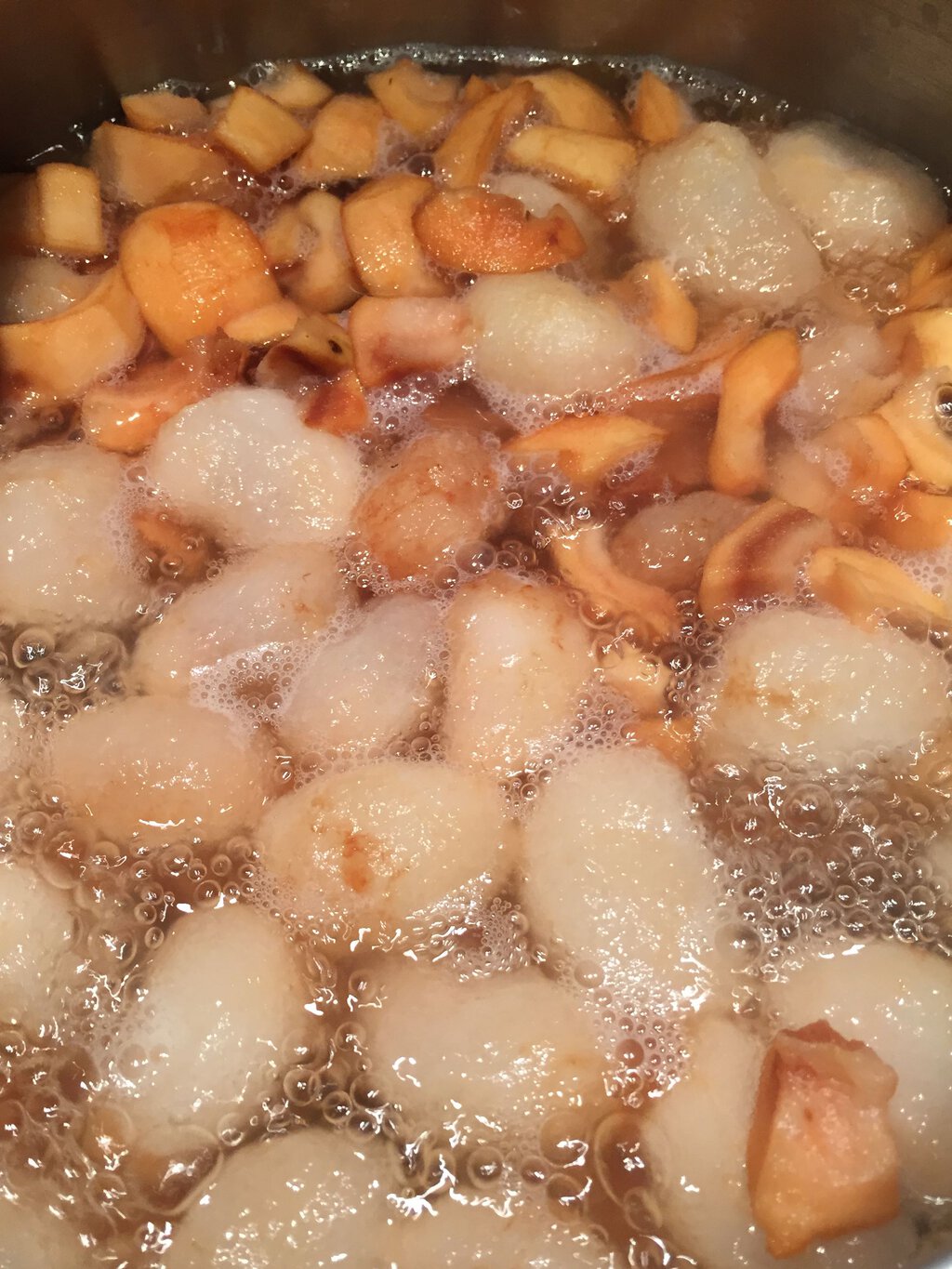 By the end of this endeavour I had the best parts of a kilo of krathon meat. I put it in a pan with 2 kg of water and brought it to a boil. As the boil started, ph was already down to 2.35. These guys were tart.

I let the boil continue for 30 minutes. At that point, I reweighed and added back the 510g of water lost during the boil. That way, we’d be working with the same 2 litres of water, or thereabouts. I cooled a sample and took a hydrometer reading - 1.010. We were going to need more gravity. 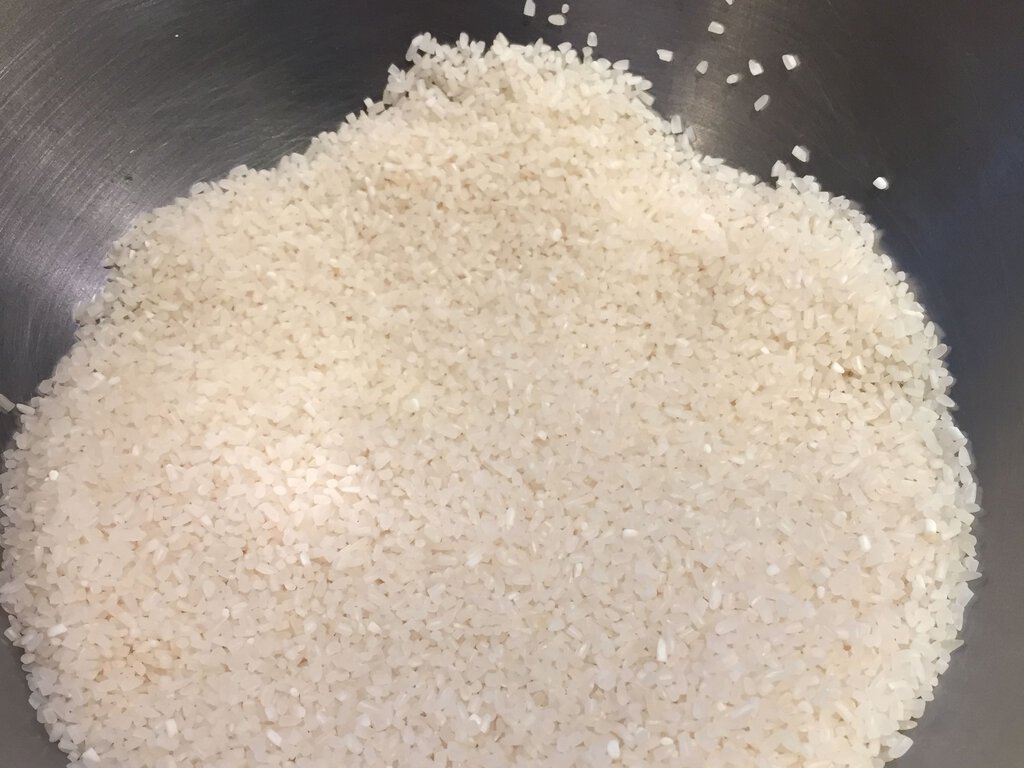 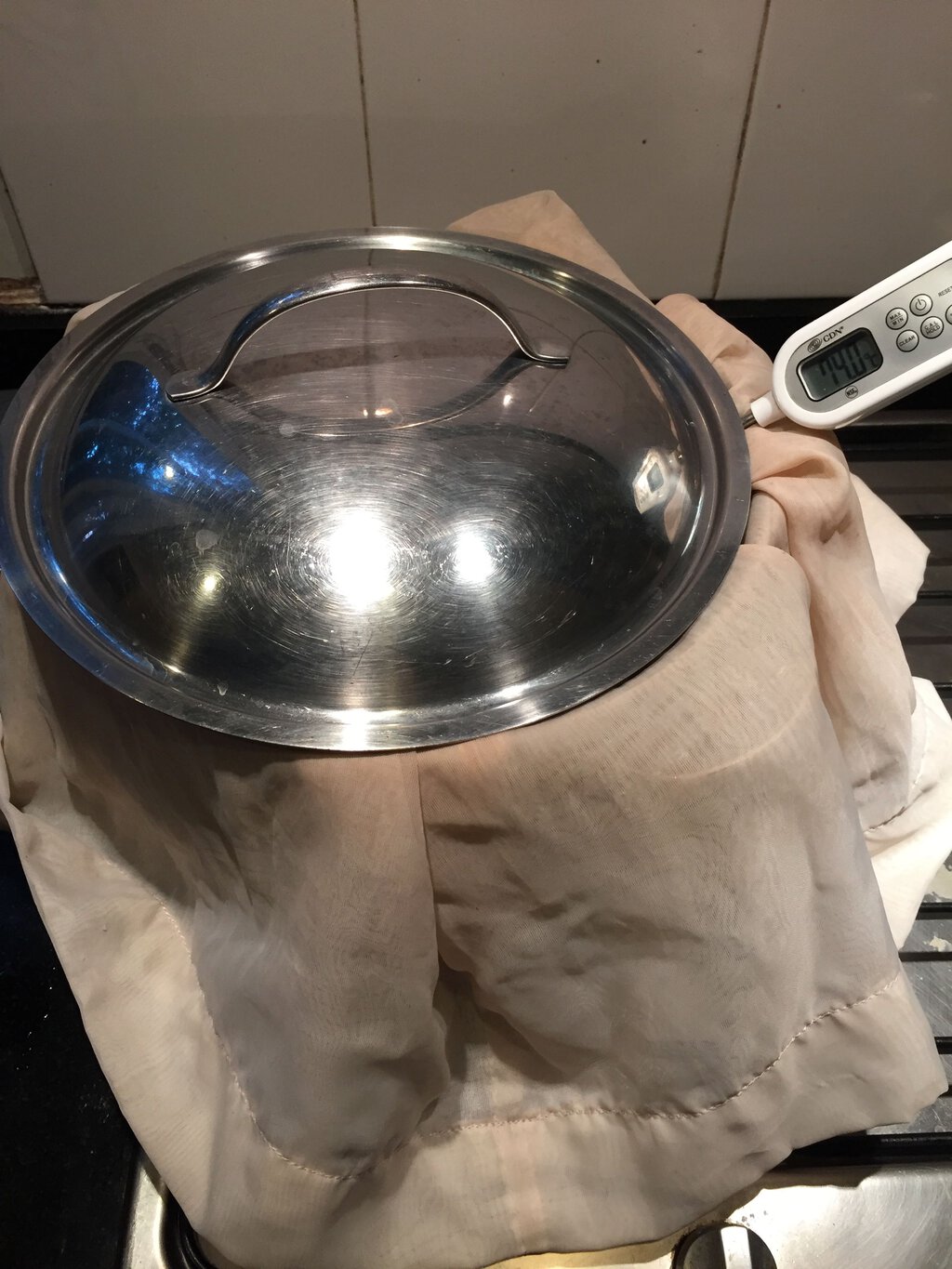 I brought 3 litres of water to the boil, added 1lb of rice (please don’t ask about the mixed units - I was thinking on my feet). Once this came back to the boil, I killed the gas and let it steep until the temperature fell to just under 70 deg C. (Mid-way through I decided to switch to a BIAB approach, and tipped the rice into a muslin bag). At that point I added 1lb of Belgian Vienna malt to facilitate the starch conversion. Mash lasted 1 hour. Then I removed the grain and boiled the resulting liquid for 30 minutes. 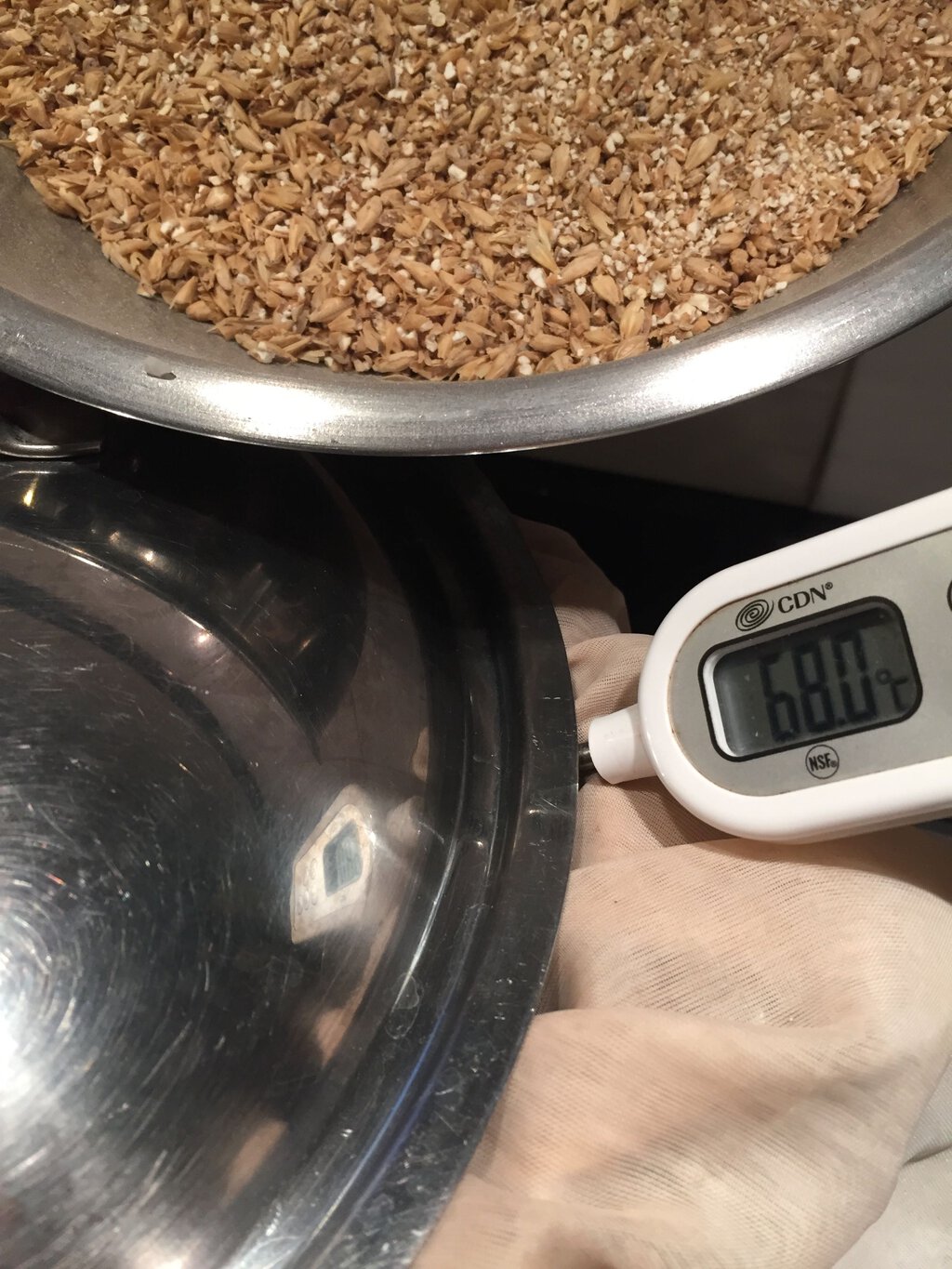 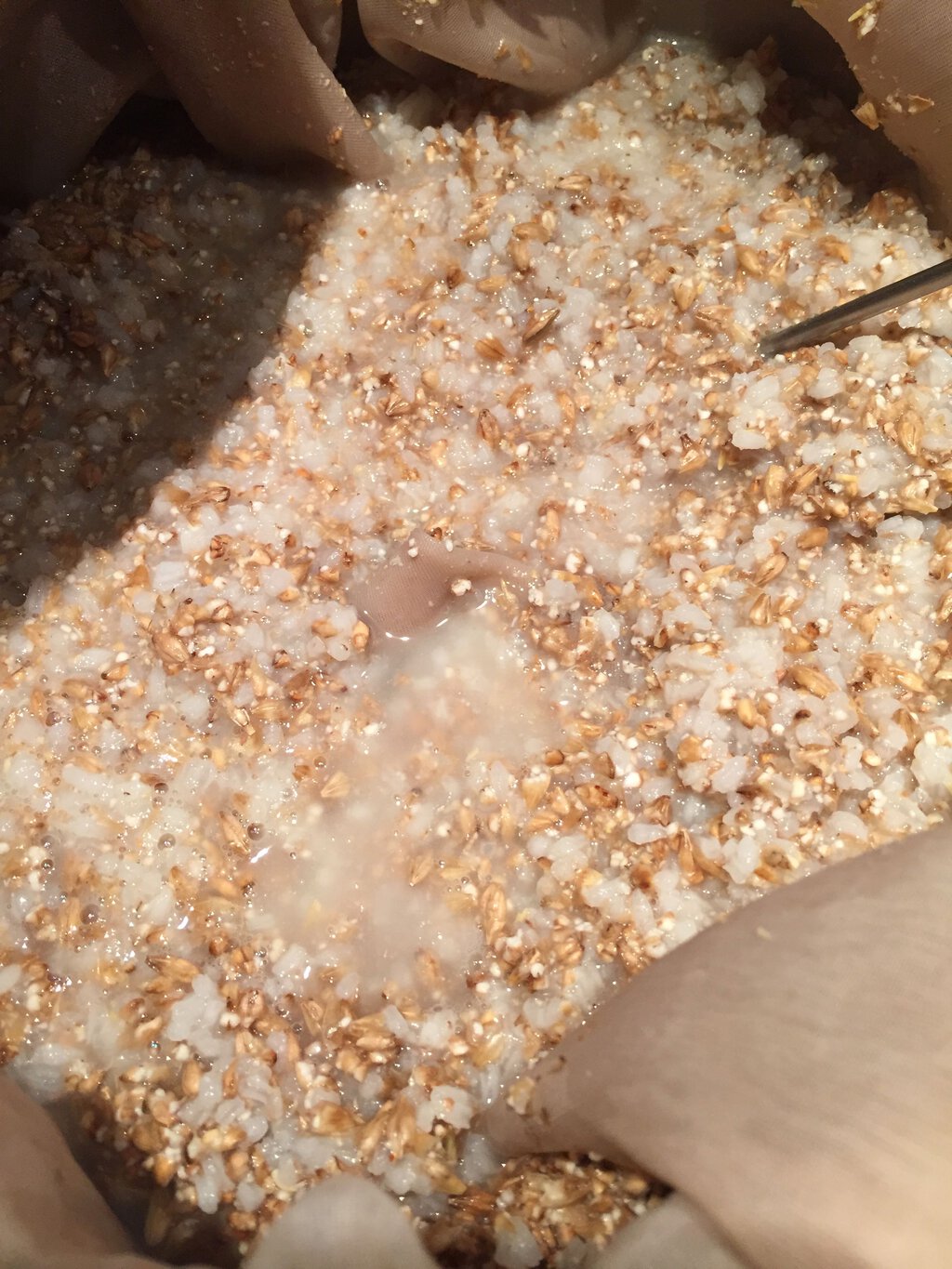 Meanwhile, the krathon juice had been chilling in the freezer. I added this back to the wort (after taking a sample to cool before testing the gravity - a sweet 1.123 as it turned out).

I’d been planning to pitch some dirt-cheap Chinese yeast, which I’ve seen eat through basically anything you throw at it. But the 1/2kg bag has been open for a long time, and a quick test with sugar water suggested it wasn’t viable. So I hydrated 3g of Safale US-05.

Things were coming together. Though I still wasn’t sure what the final volume was. This was a kitchen brew, on regular pots and, and I was using an unfamiliar fermenter. A quick calibration on the side of the fermenter with litre marks gave me a way to measure. Now I just had to wait for everything to cool.

Once the wort had cooled, a final hydrometer reading showed around 1.052. I put the wort into the fermentation vessel (a measly 3 litres after all this work… but it’s an experiment), pitched the yeast and put this baby to bed at 20 degrees.

Update 22 July 2018 Fermentation began within 12 hours, and was going steady for several days. A week later, there’s still a bubble of CO2 coming off every few minutes. But I’ve swapped off the airlock for some sanitised foil (space constraints in the fermentation chamber necessitated it). Will give this another week to mature.

Update 28 July 2018 Primed with dextrose and bottled at 1.016 for an ABV of around 4.7%. Naturally, I couldn’t resist a taste, pre-carbonation - and (somewhat surprisingly) found it to be good enough chilled to enjoy a full bottle. Taste was slighly sour and fruity, with some body, not unlike a medium-dry scrumpy cider. Definitely shows promise beyond expectation.

Update 16 September 2018 Posted some pictures at the two month tasting. It has come along nicely.