Apple cider vinegar came up in a few recent conversations. As usual, my head was soon overtaken by a project to make some myself. Maybe even turn it into a regular thing.

Reading and YouTubing around turned up lots of material, much of it conflicting, on the best/correct/absolutely-only way to go from apples to ACV–some people insist that you need to add mother from a previous batch as a starter, others deny this. I finally turned to Sandor Katz’s The Art of Fermentation (where I should probably have started, in all honesty) for assurance that mother was not necessary (sorry, Mum).

The process and science is fairly simple: left to their own devices apples in water (with maybe some sugar) will ferment naturally, producing cider. If the cider is then left open to oxygen, Acetobacter will do the job of converting the alcohol to acetic acid, aka vinegar. 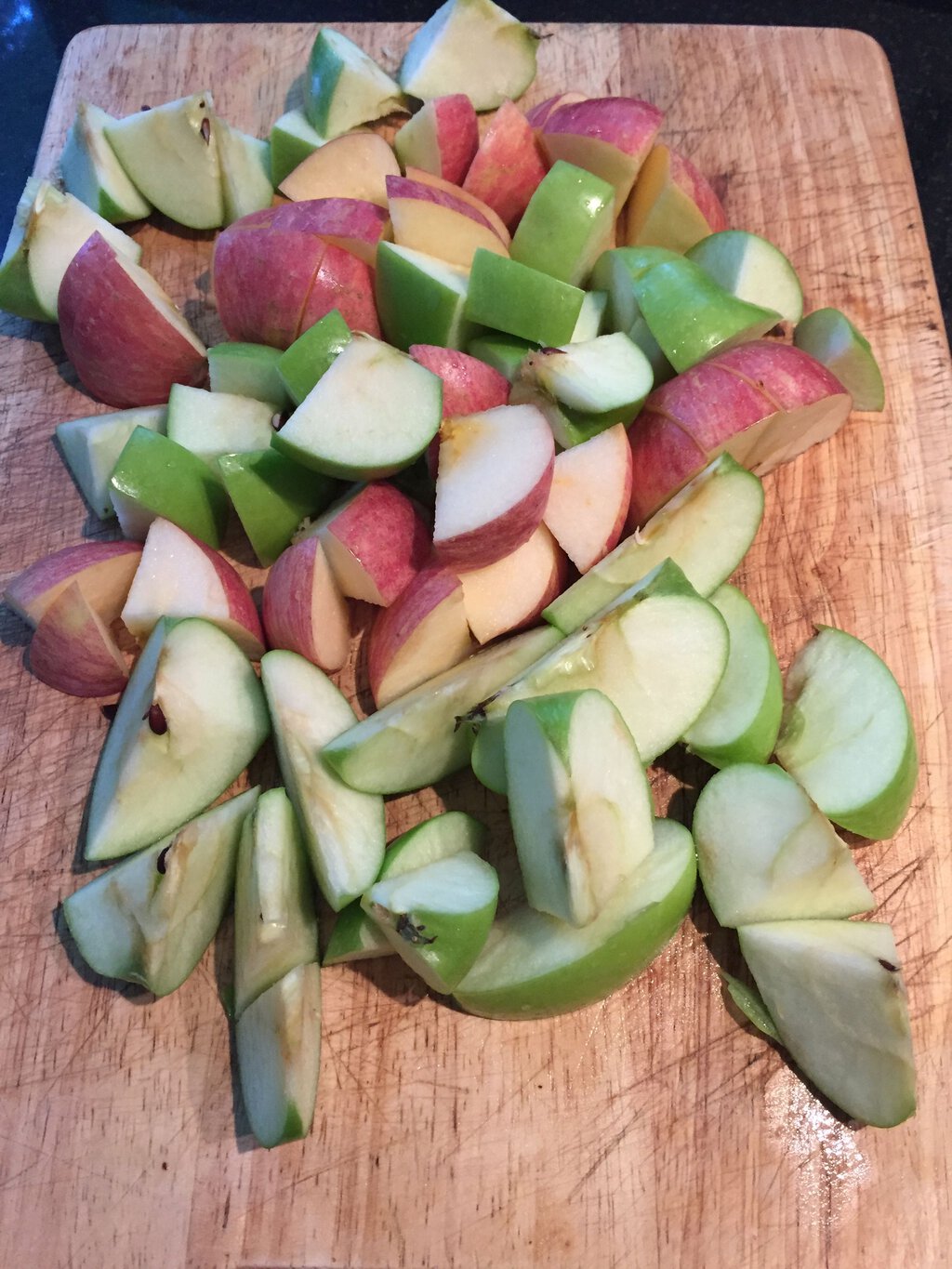 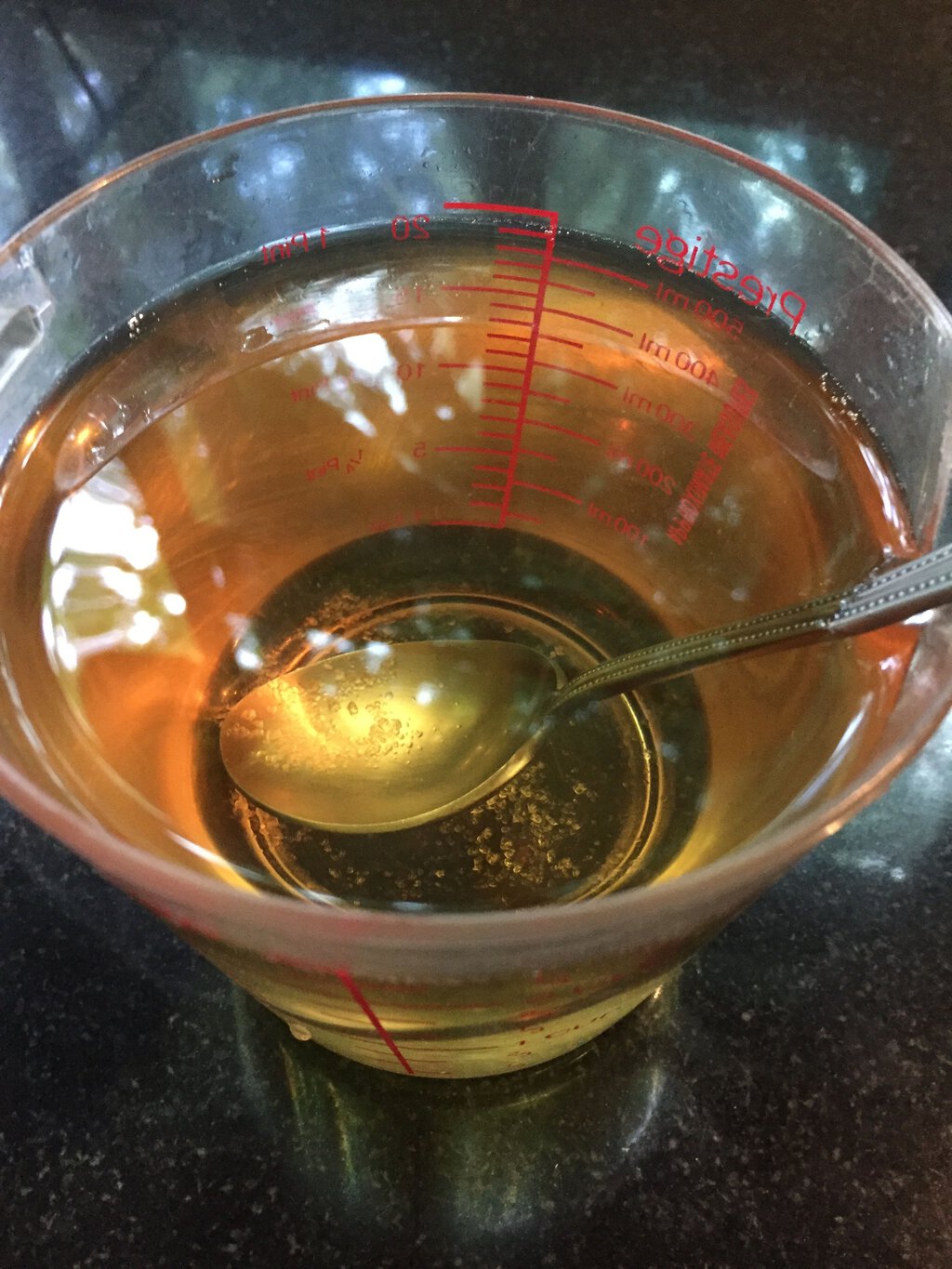 Armed with these basics, I picked up a couple of kilos of apples at the store - one each of a tarter green apple (Granny Smith) and sweeter dappled pink fruit. I roughly chopped enough of these in a 50-50 mix, preparing enough to fill my fermentation jar, leaving skins, pips and all in place. I also dissolved around 70g of sugar in 1/2 litre of water.

Minimal prep complete, I put the apples in a sanitized jar, leaving some head space and filled with the sugar solution, being careful to cover all the fruit. I placed the glass lid of another, smaller, jar atop the apples to weigh them down and keep them submerged. I then improvised a cover/hat from a coffee filter, secured with an elastic band. Practical and cute. 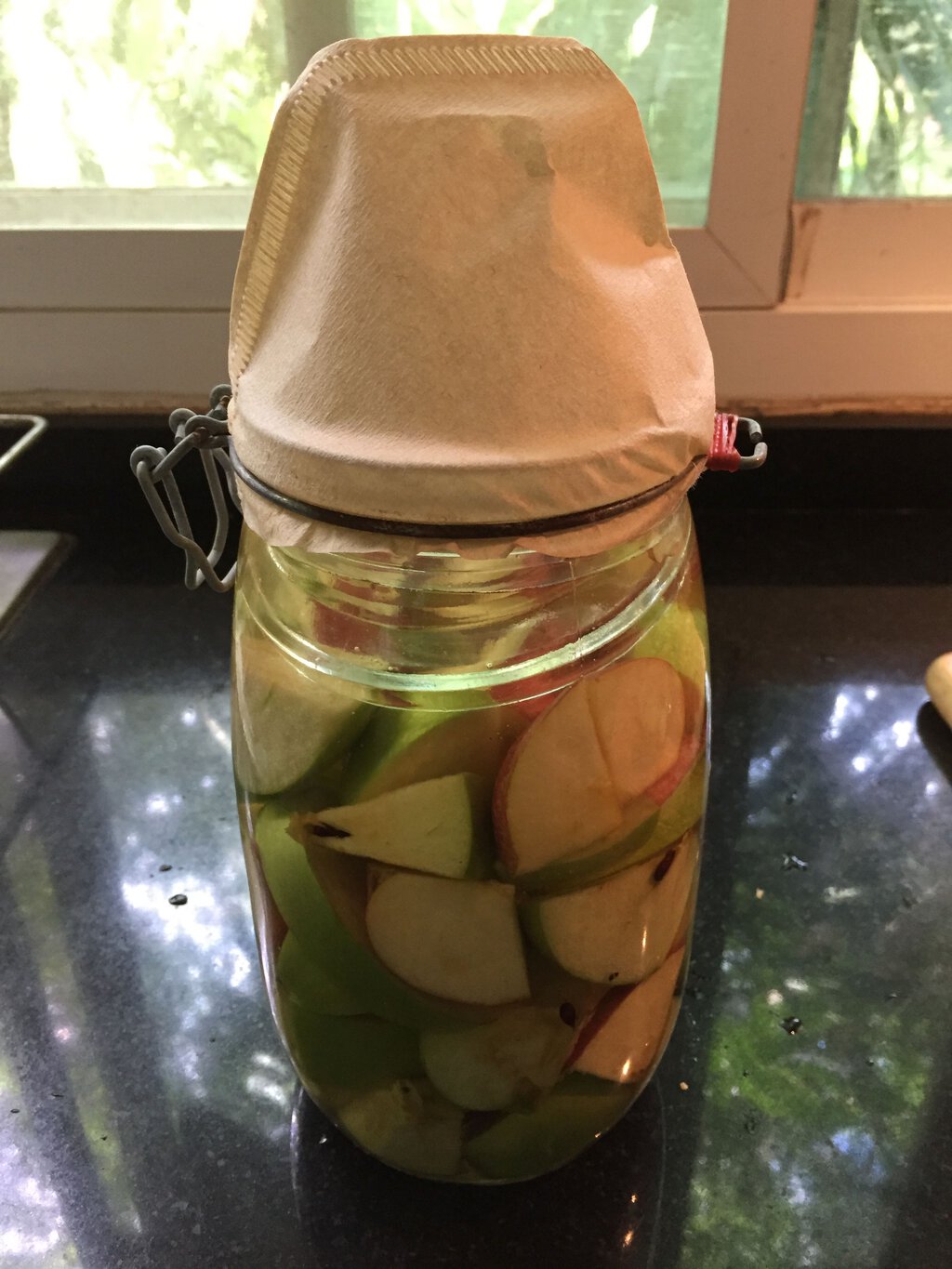 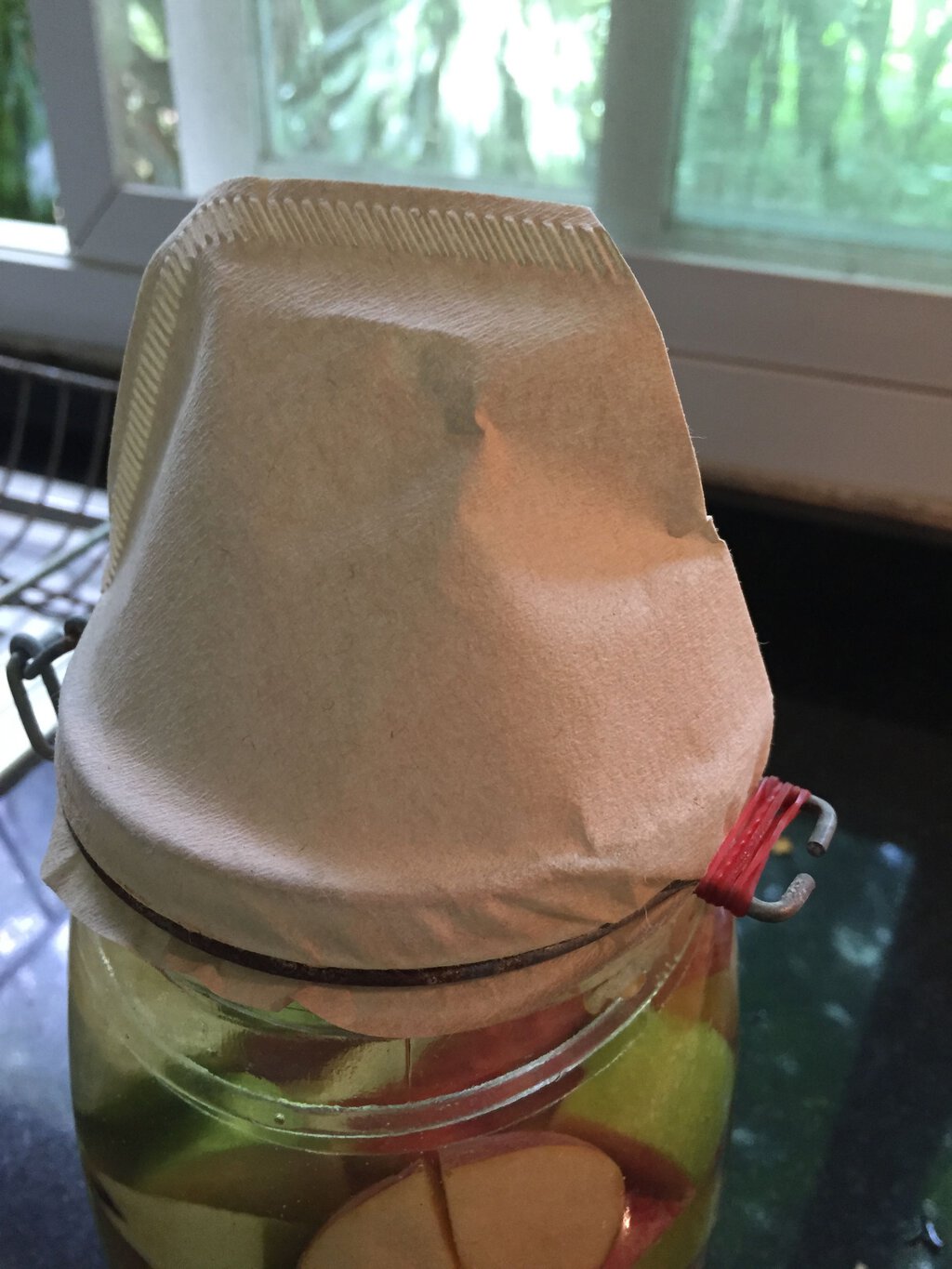 And that was it. I moved the jar to the basement, where there’s a fairly steady temperature of around 24 degrees celsius this time of year, and covered it with a black cloth. Within 24 hours, there were bubbly signs of fermentation which continued for about three days. (There were also signs of ants, no doubt attracted by that sugar, so I placed the jar in a shallow water bath to keep them at bay, until the sugar was gone). 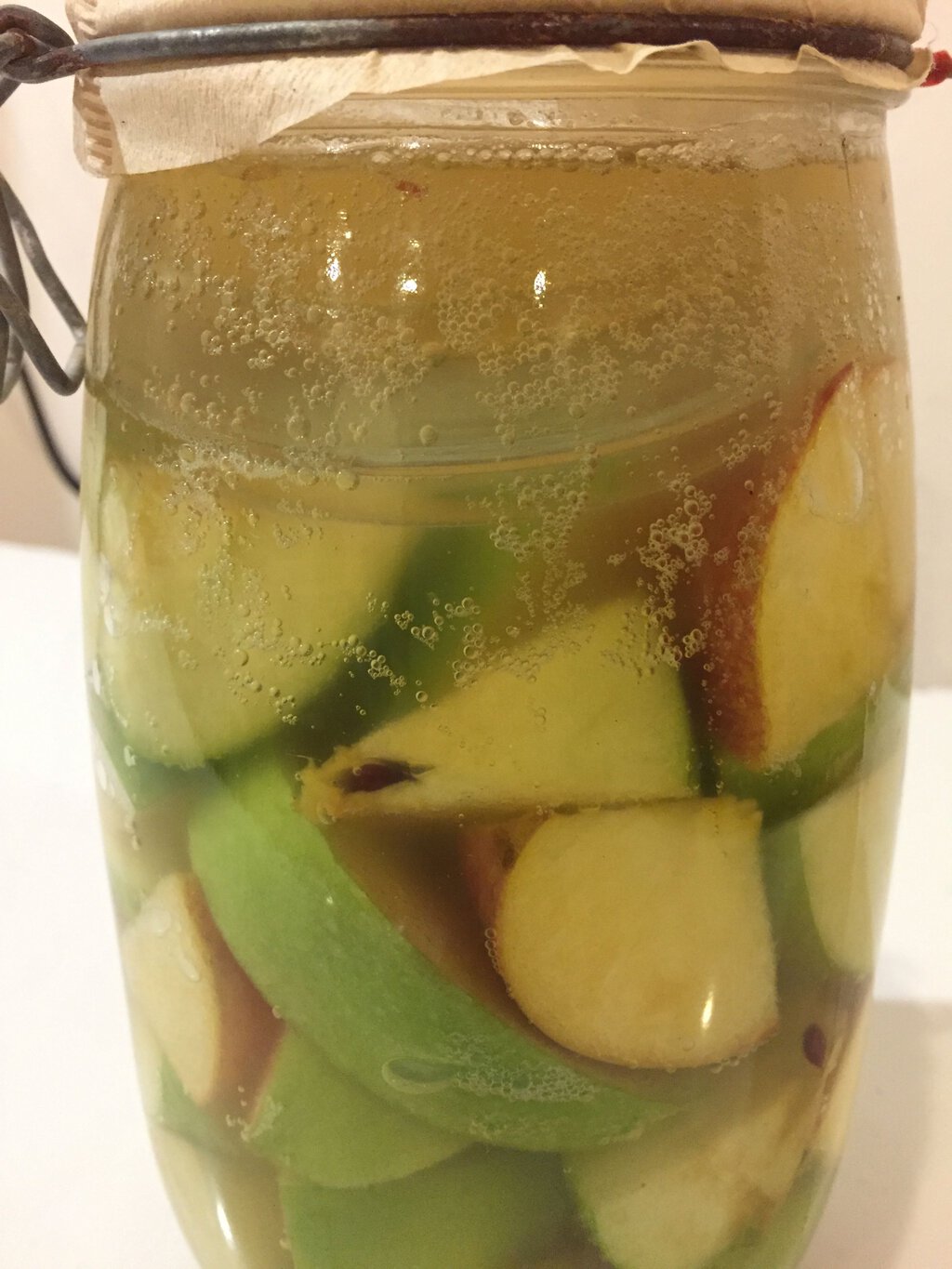 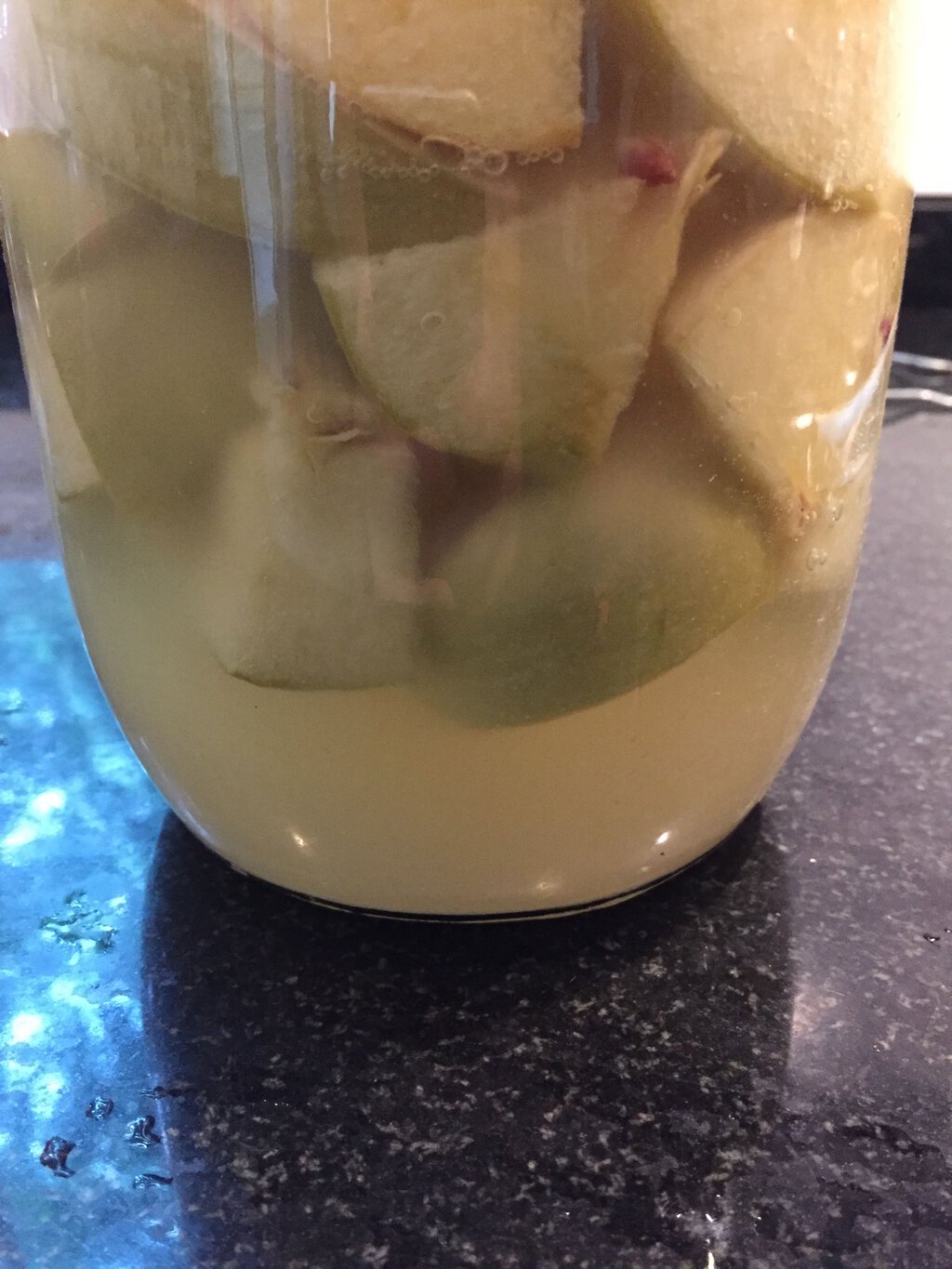 Two weeks later, with alcoholic odours giving way to more acidic vapours, I removed the now very soft apples, straining them in a muslin cloth to extract as much liquid as possible, and returning the liquid to the same jar. I put the jar of budding vinegar back in the basement, again covered it, and let it continue on its journey for a further two weeks.

And, so, a month after chopping apples, the vinegar looked and smelled to be ready. A taste test confirmed good, sharp acidity with a lively, fruity backbone. Atop the vinegar was a gelatinous SCOBY, the missing mother, born from nothing, a good inch think. I transferred the vinegar to a sealable jar (I don’t think it will last long, so I didn’t take many precautions, beyond sanitation, for longer-term storage), and the mother along with some of her liquid progenitor to another jar. Time will tell if we let her help out with a future fermentation. 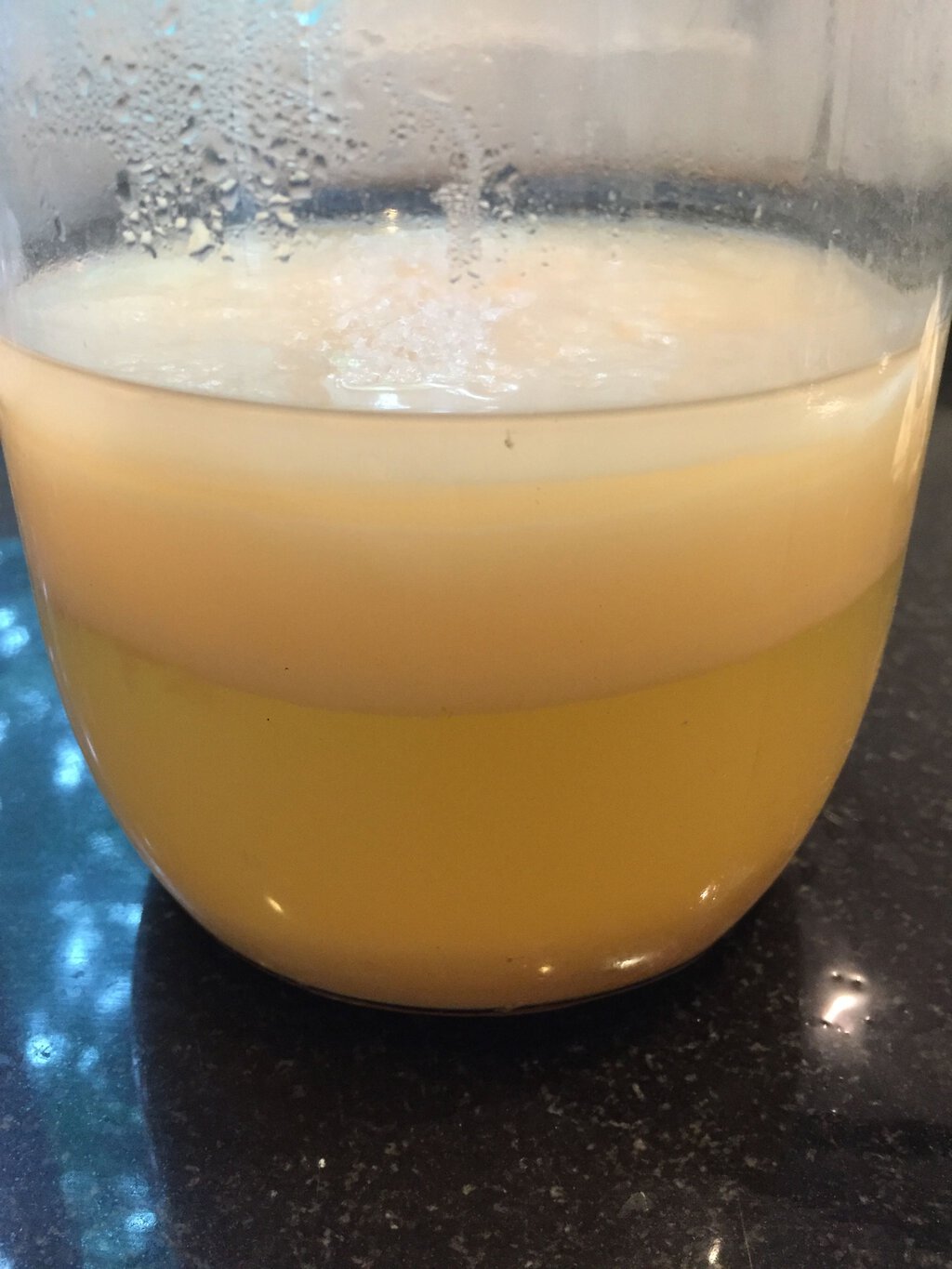 Retrospective Very pleased with the flavour of this vinegar - it is quite delicious, especially diluted with water as a drink. Keen to make more. It’s an easy process, though given the time it takes certainly worth making larger batches. I also wonder if a finer cut on the apples would allow squeezing more vinegar from the same size vessel?