Discovery of a two-week old sourdough loaf at the back of the fridge during a Sunday clearout caused a fermentation synapse to spark. Kvass! I’d never made it. I’m not sure I’d ever drunk it. But I was well aware of it, and now was the time to give it a try.

Cursory research revealed a common pattern with such things - myriad approaches, little consensus. It was already mid-Sunday afternoon, and rather than synthesise a preference I thought I’d dive in with the little learning I had. The only thing I decided as I slid into the experiment was that I’d avoid the temptation to throw dried brewers/bakers yeast at the problem. 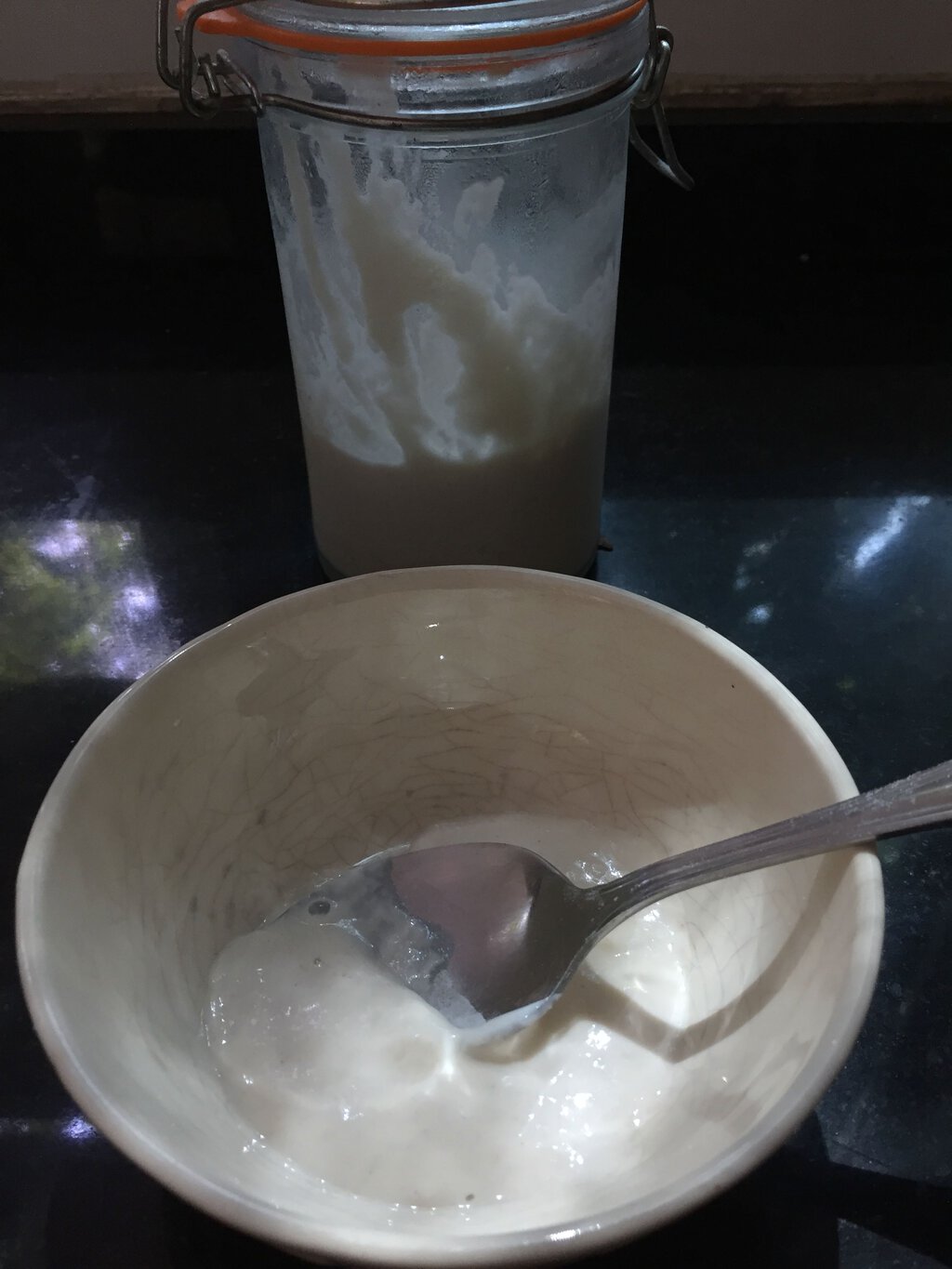 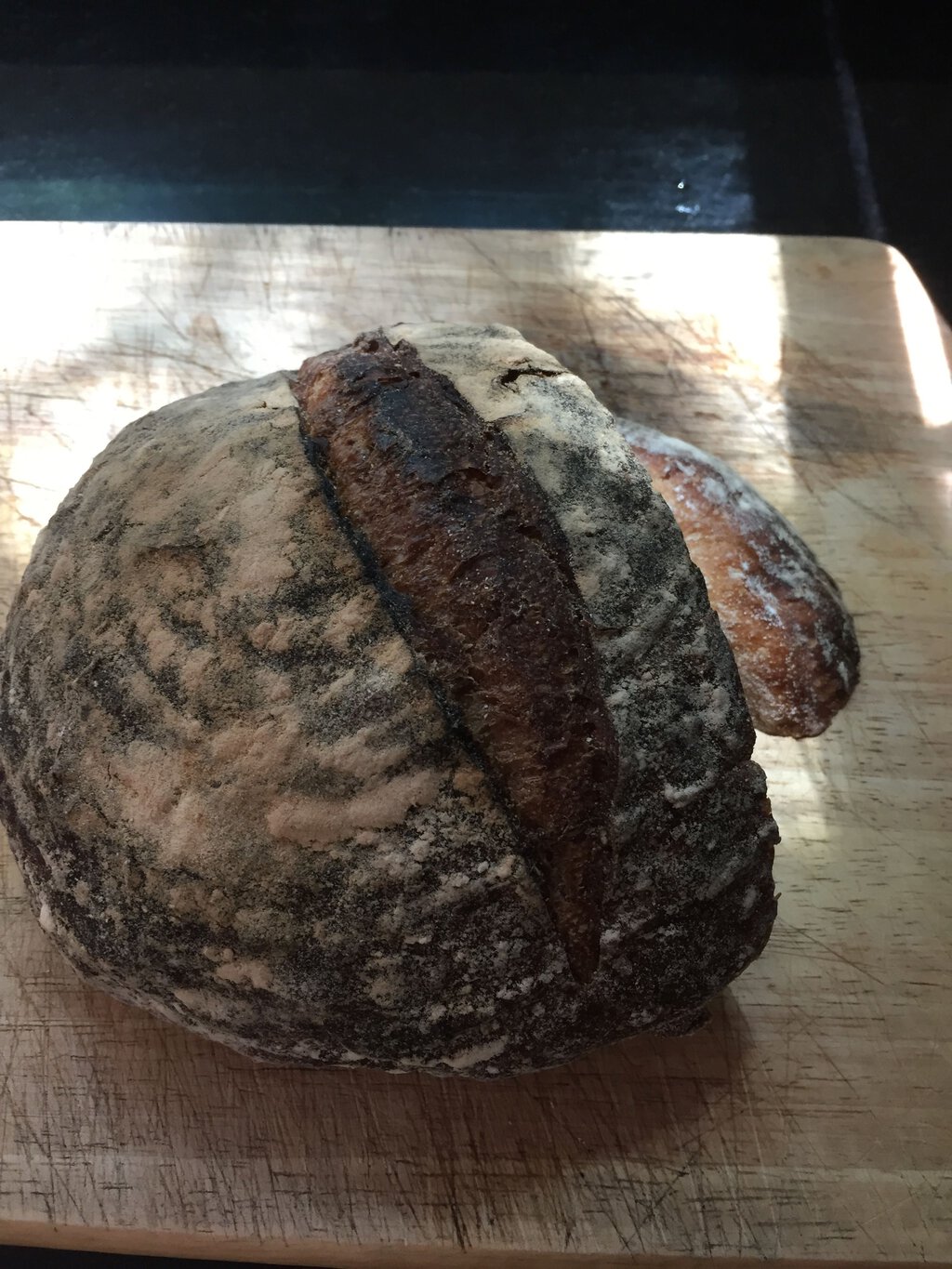 My sourdough starter was recently put to rest for the week in the fridge, so I began by taking out a tablespoon or so and mixing it with roughly the same amounts of flour and water, making a loose paste. I set this aside, hoping it would spring back to life in time for work. 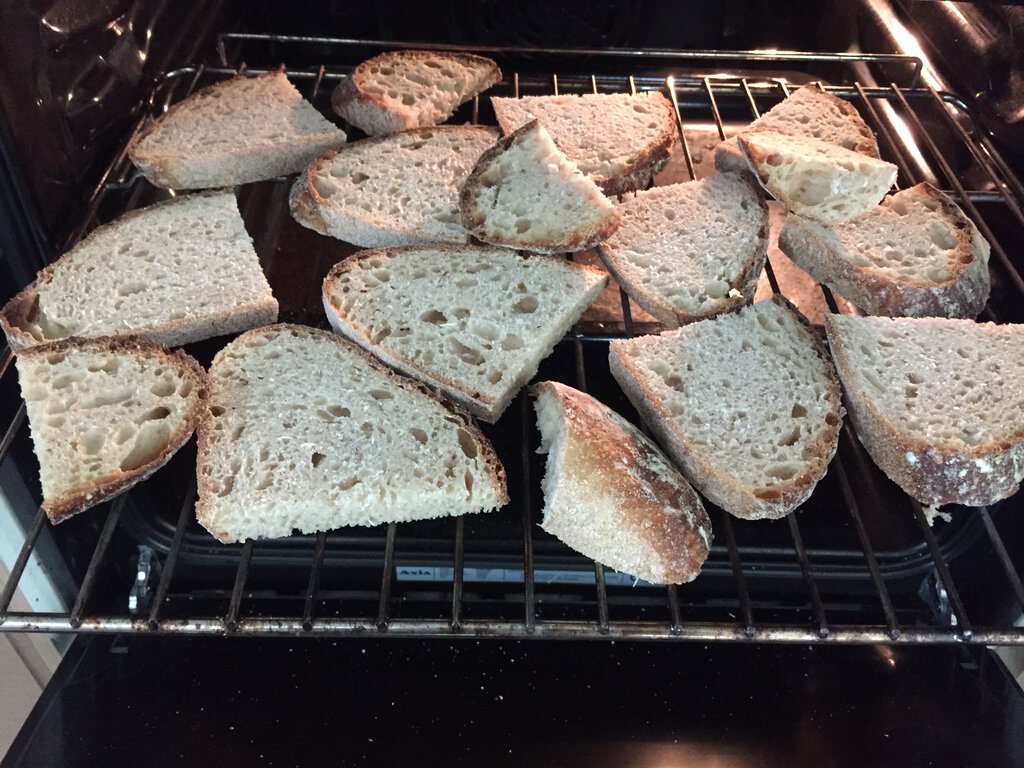 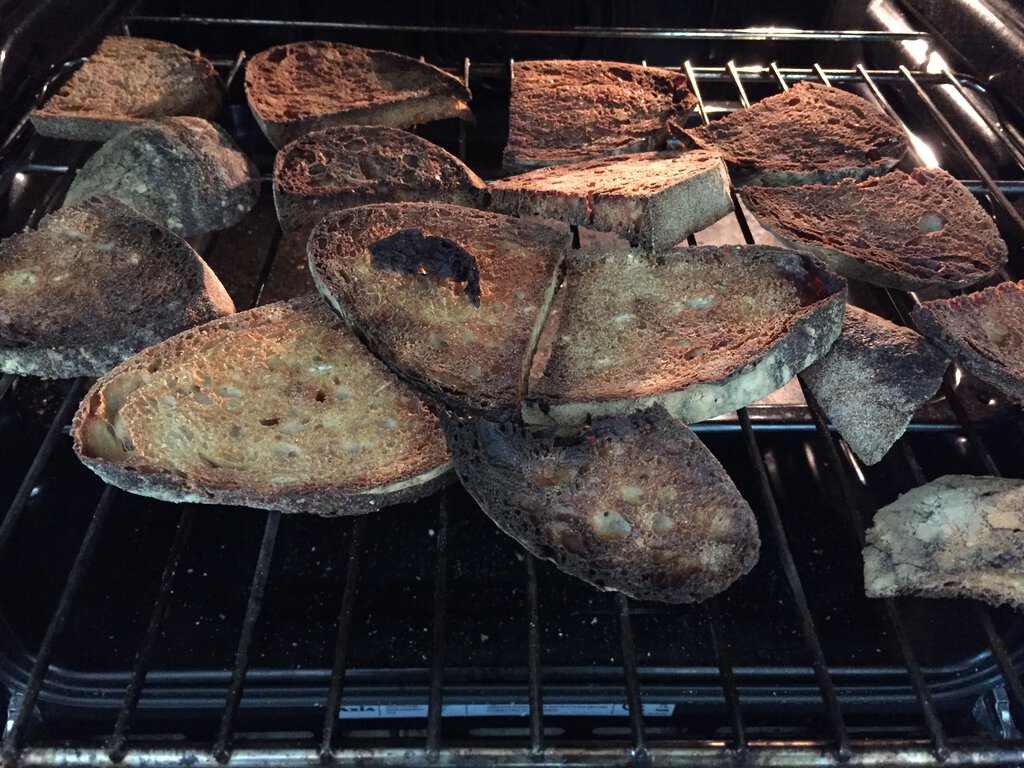 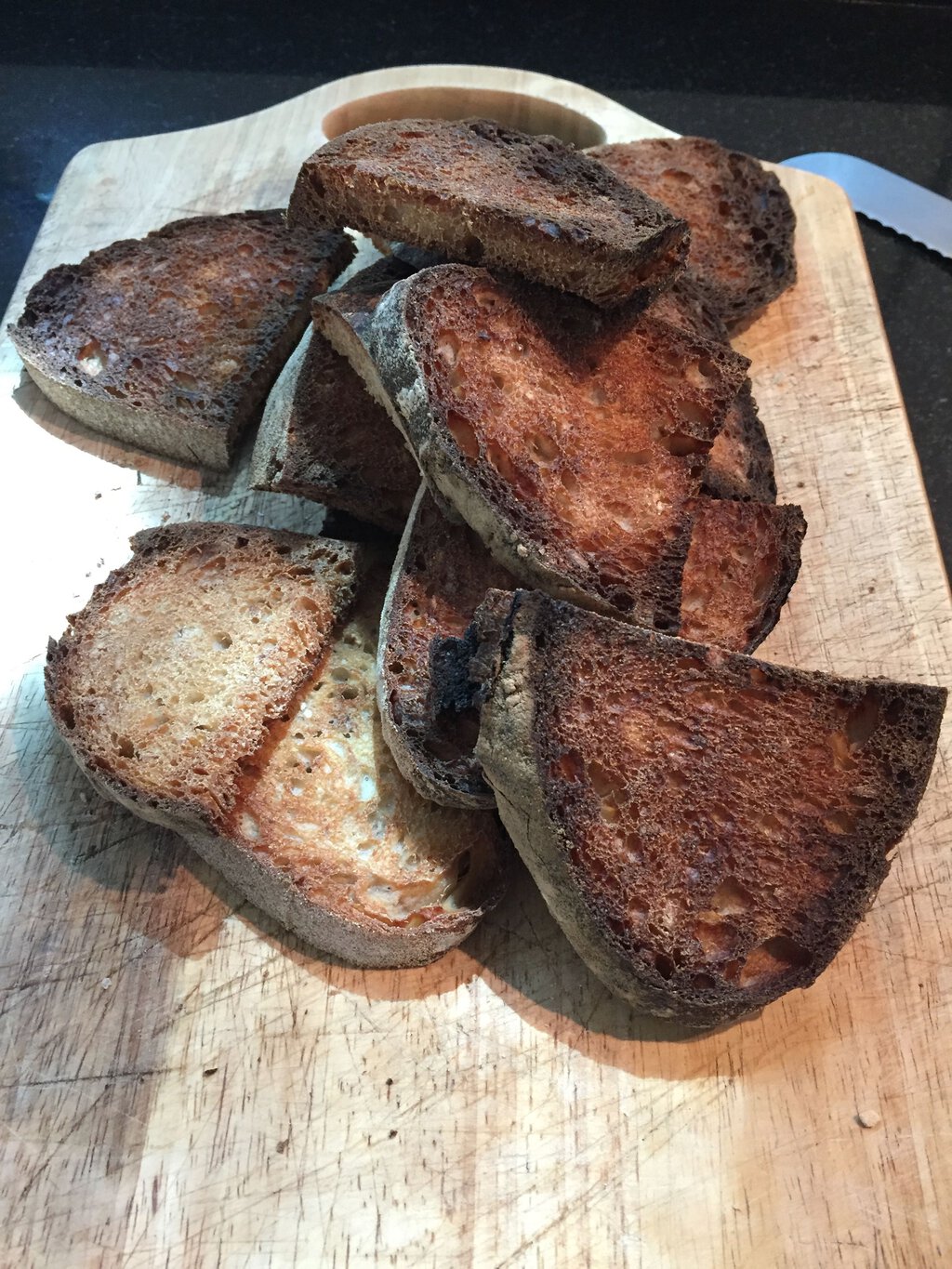 Firing up the stove I got 4 litres of water heating up. I roughly sliced the bread and laid it out in the oven which was set on grill and fan at a moderate heat. 10-15 minutes with a few turns created a well-browned pile of dry toast with a few pieces verging on charred.

Meanwhile the water had come to a boil. I turned off the heat, and immersed the toast into the the hot liquor, pushing it down to make sure it was well soaked. The effect was surprising bubbly as the crisp bread released its trapped oxygen into the water. Lid on, I left the pot to rest. 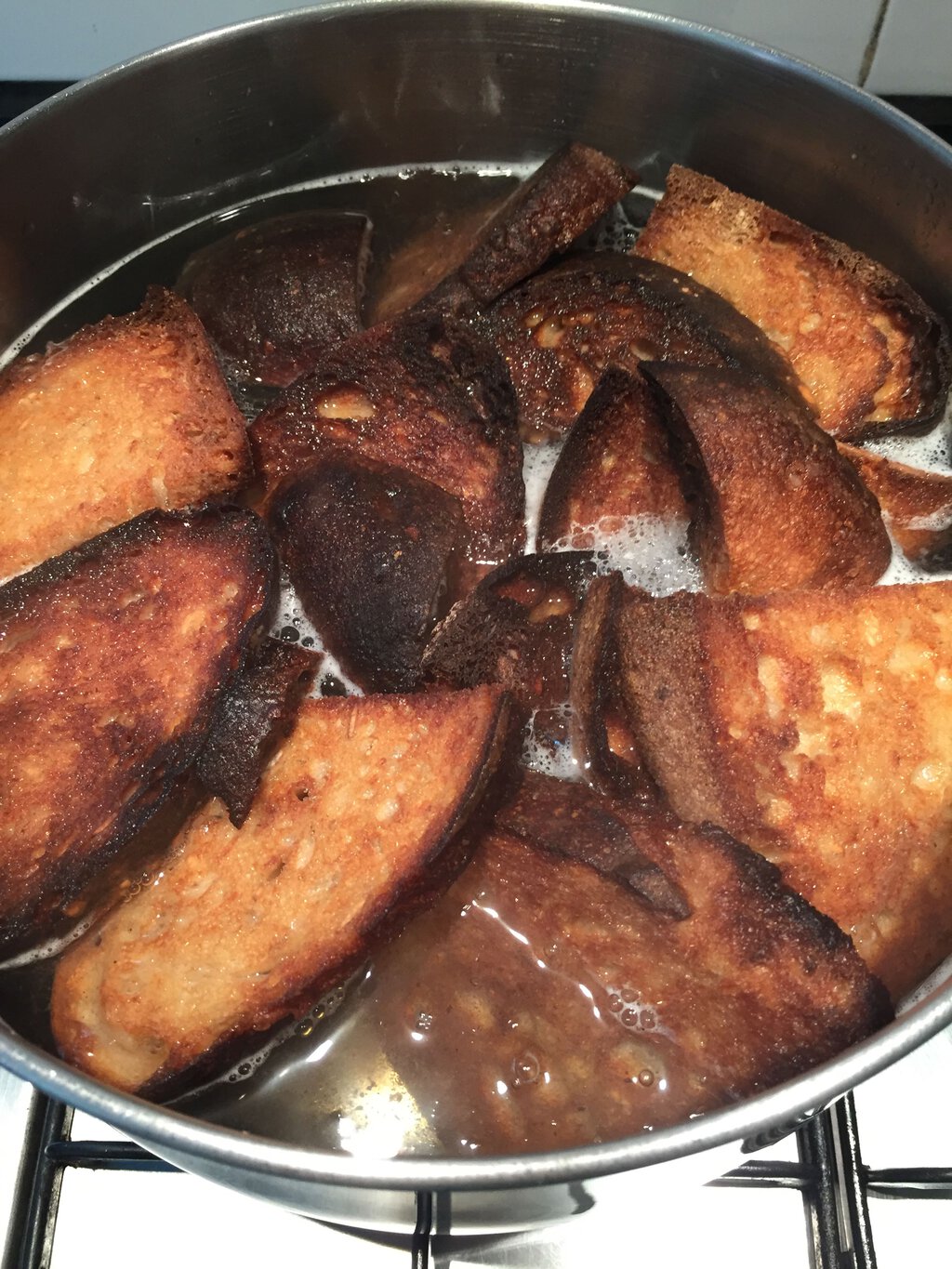 Around six hours later, the temperature was still hovering around 40 degrees. Slightly too hot to pitch. But it was getting late, and I felt I might want to add some colder water anyway to dilute things. 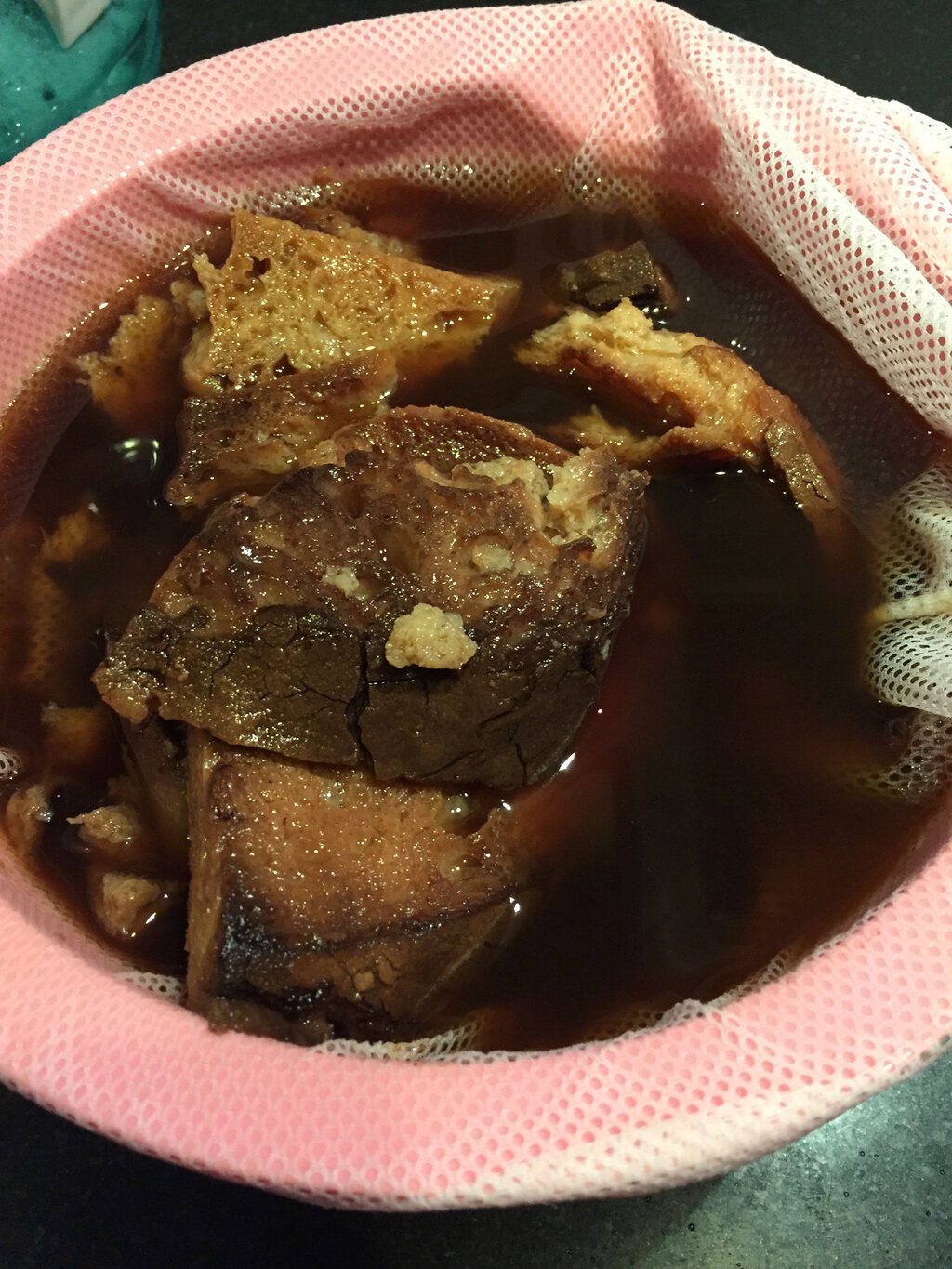 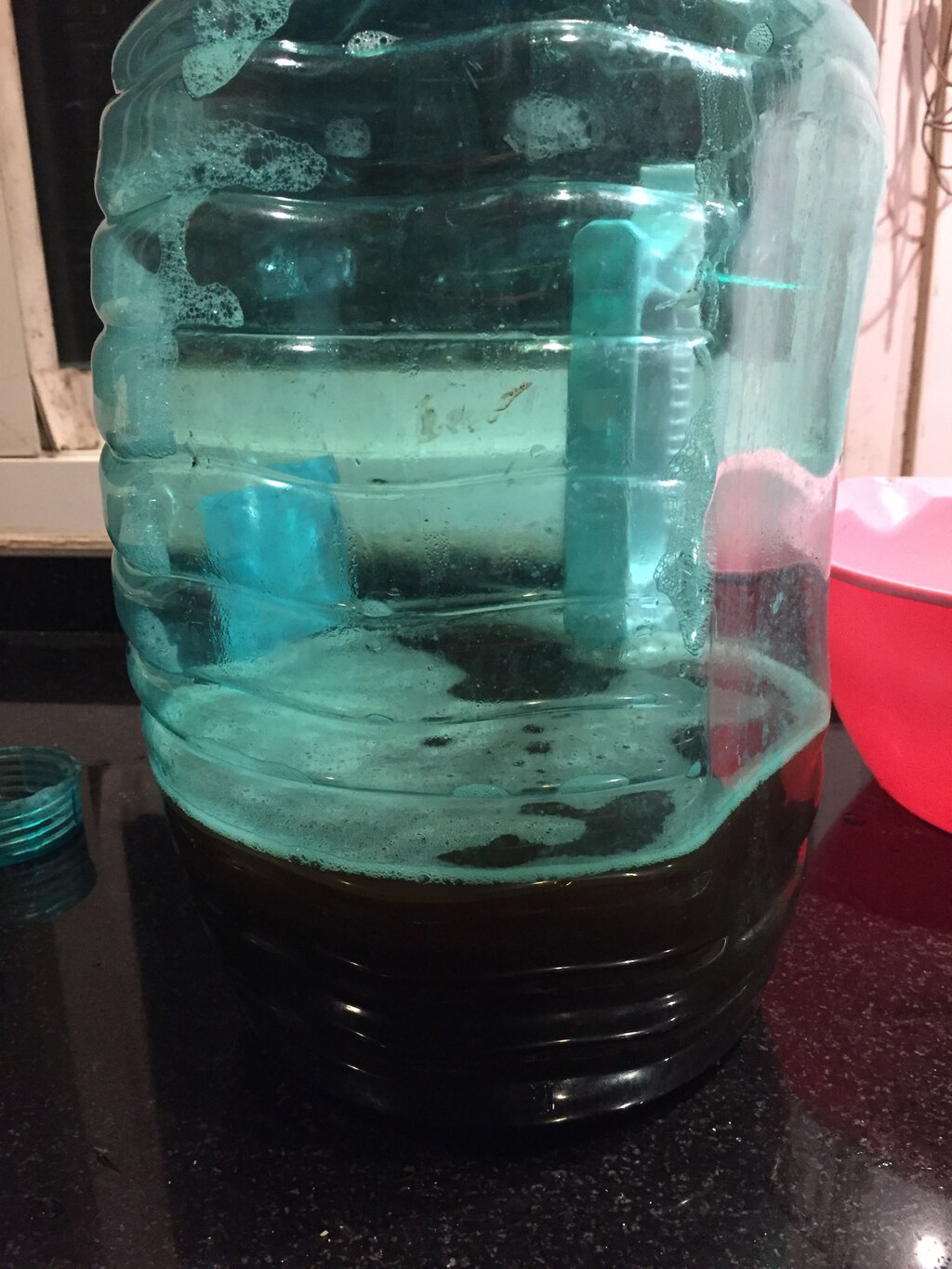 So I passed the bready mulch though a piece of muslin cloth into a bowl, squeezing it well, and tipped the wort into a sanitized 6 litre vessel. I was a little surprised to see only around 2 litres of fluid - I guess a lot was lost to evaporation and the absorbent bread. 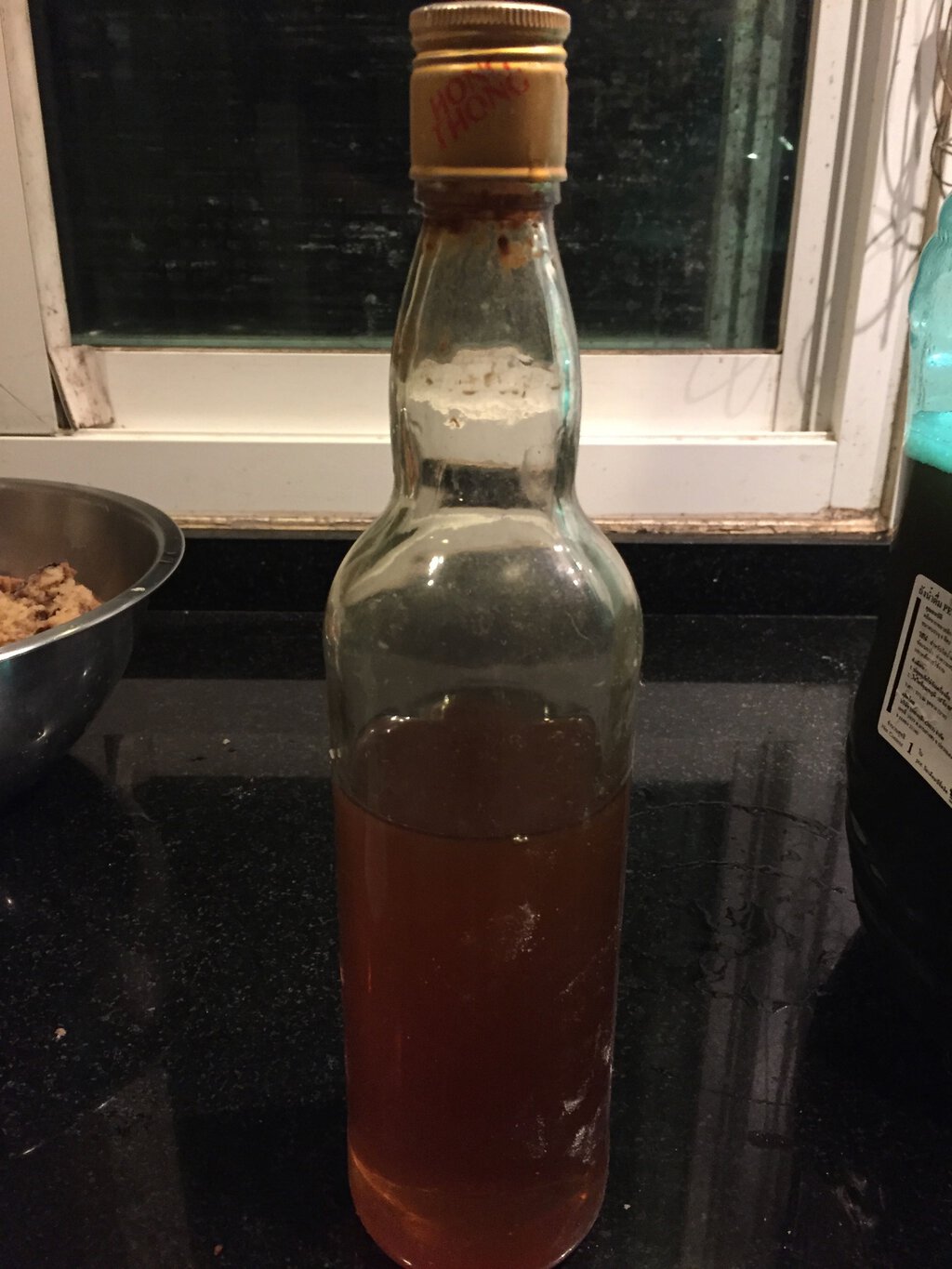 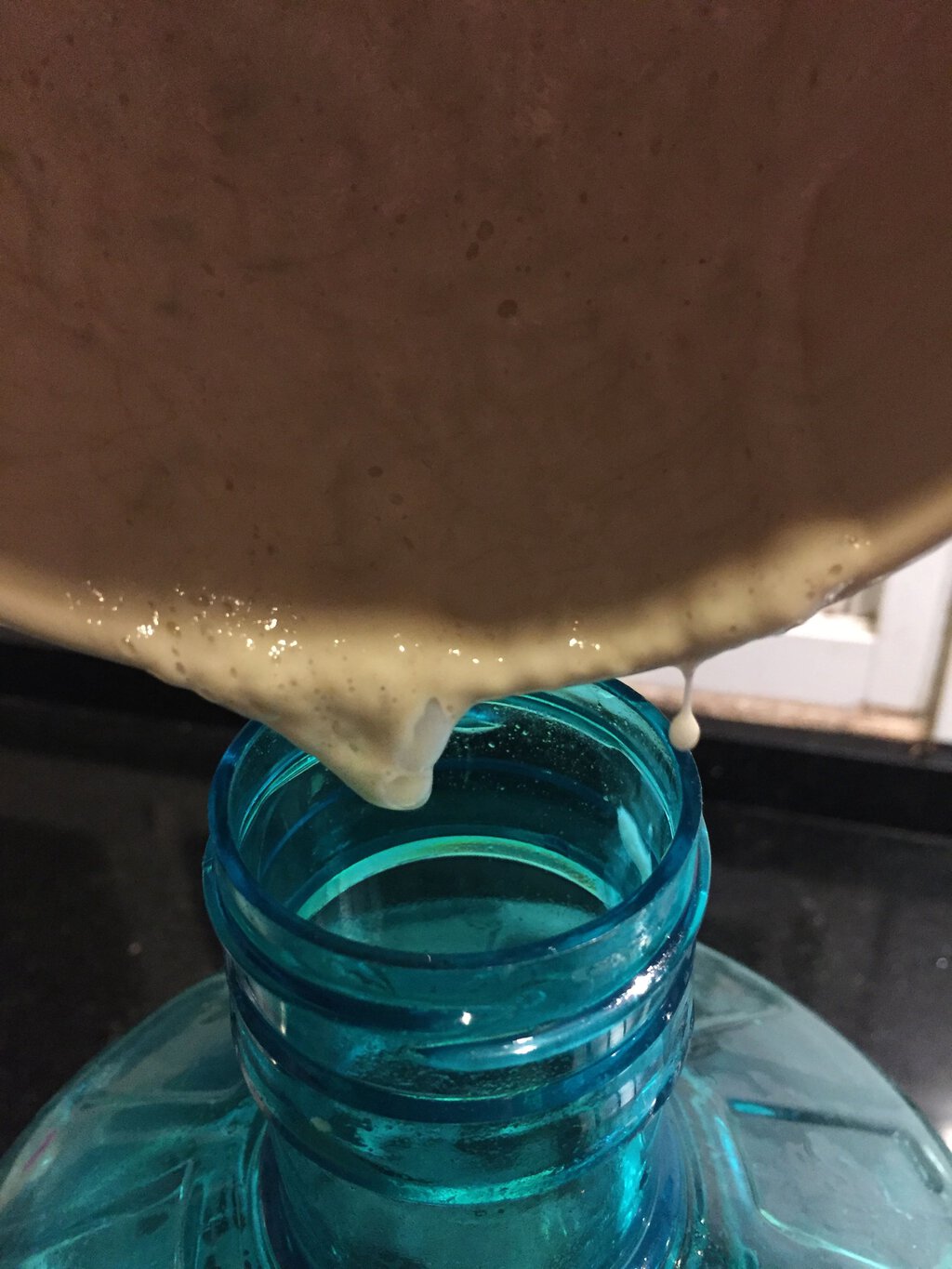 I added a good glug of local honey (no measuring today) - around 1/3 of a bottle, so I’d say about 250ml. Then topped up the volume to roughly 5 litres using bottled water. A quick refractometer reading showed 5.5 Brix (roughly 1.021 SG). Temperature was a little over 30 degrees, so I pitched the now reasonably bubbly sourdough starter, careully dripping it through the neck of the fermentation vessel.

After a vigourous shake of the bottle to mix things up, I popped in a bung and airlock and left the potential to do it’s thing. 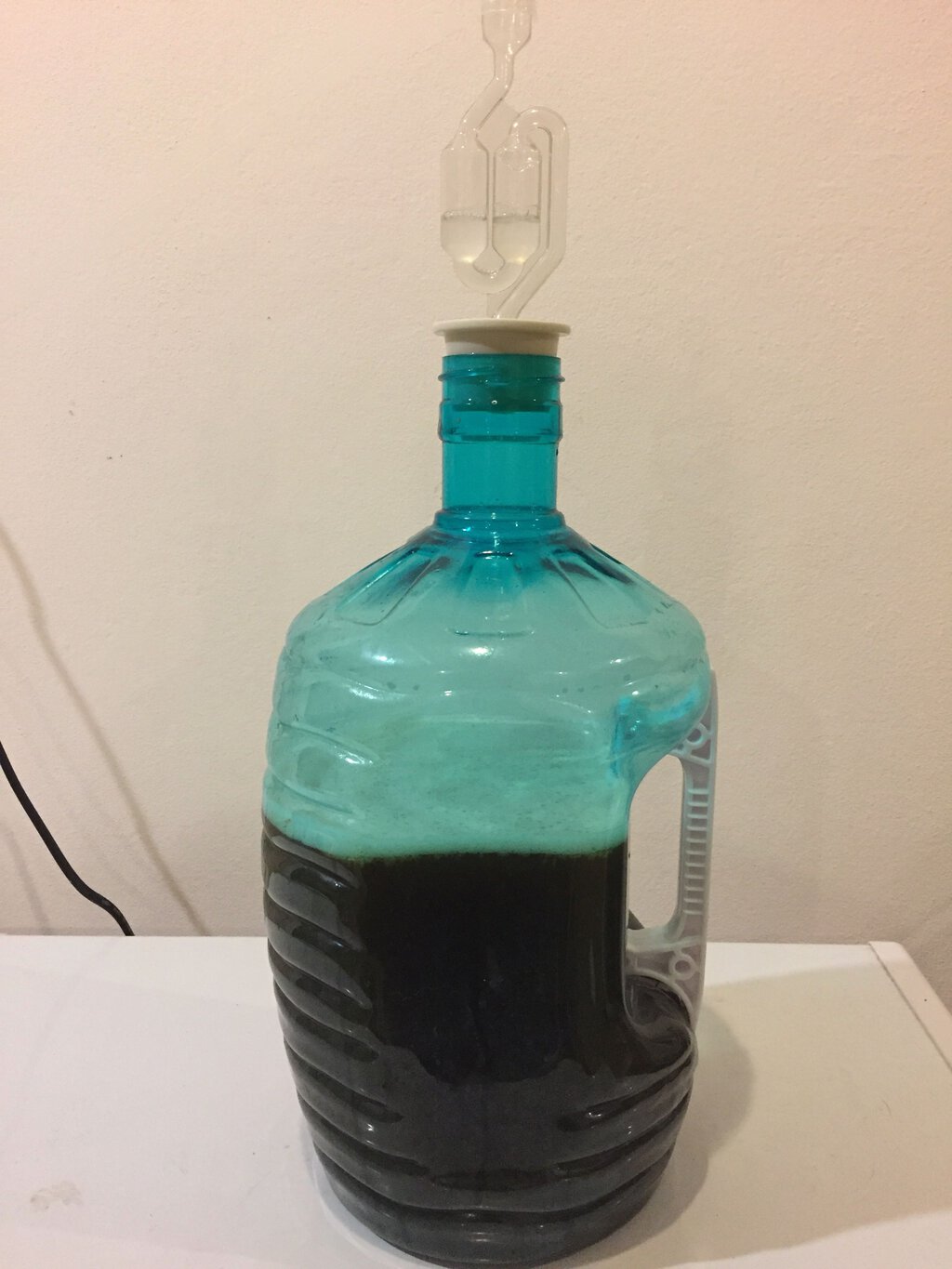 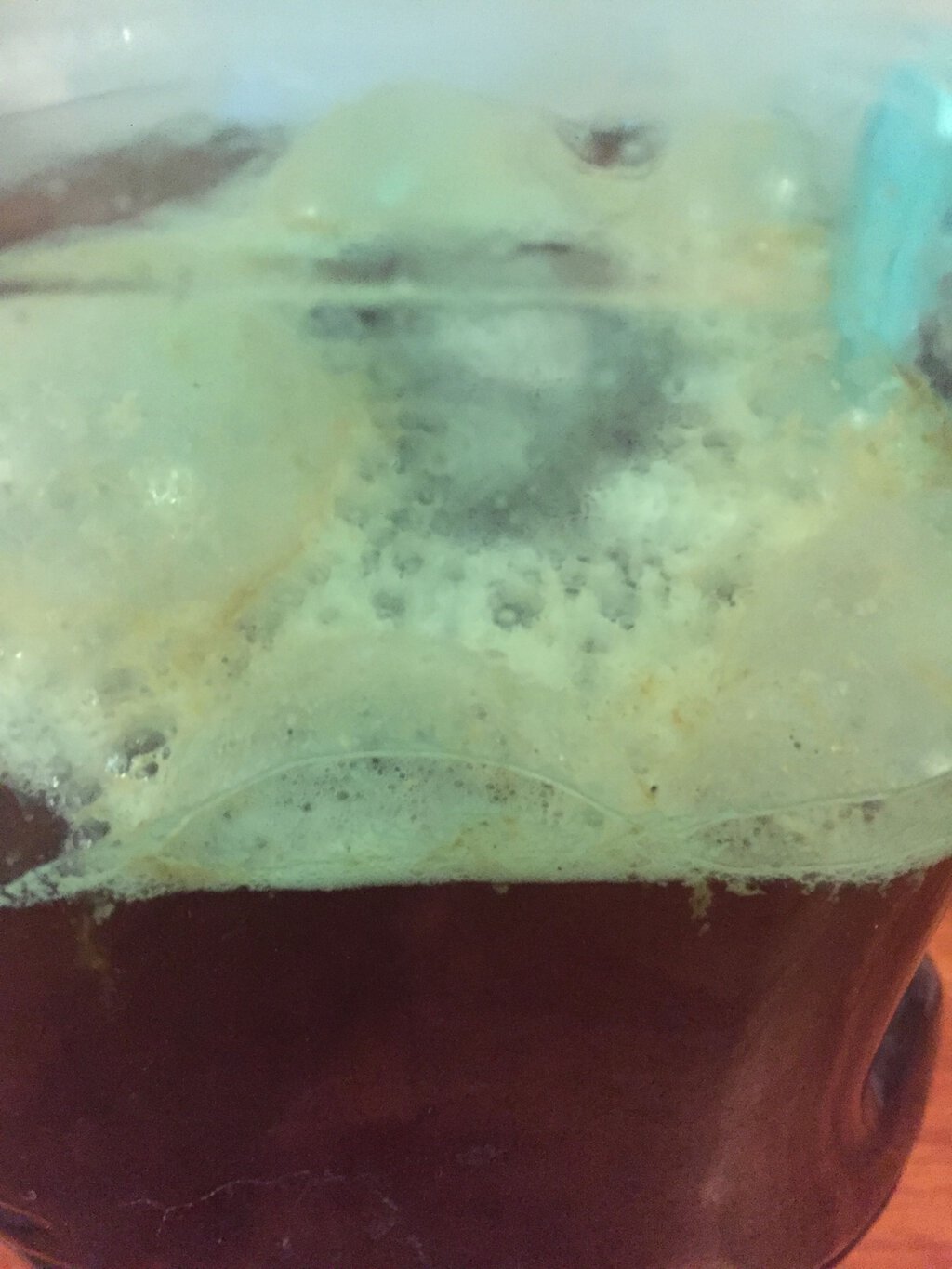 In around 24 hours, there was some evidence of fermentation on the surface of the liquid, and within 36 hours, the airlock was popping with some slow regularity. Activity built from there. While by no means vigorous, the smallish kreuzen and rising-falling motions of particles indicated reasonable yeast activity. The question was when to package this?

A little more reading suggested that it’s normal to package early, with no priming, and let fermentation continue in the bottle for carbonation. So around 72 hours after inocculation I siphoned the kvass into some flip-top containers. I also made the call to let fermenation continue at room temperature (around 25-32 Celsius) for a further period before refrigeration. At this point, specific gravity was at 1.018 - giving us around 0.4% ABV. And the flavour was quite pleasant - bready, slightly sweet, with a tiny but moreish saltiness. 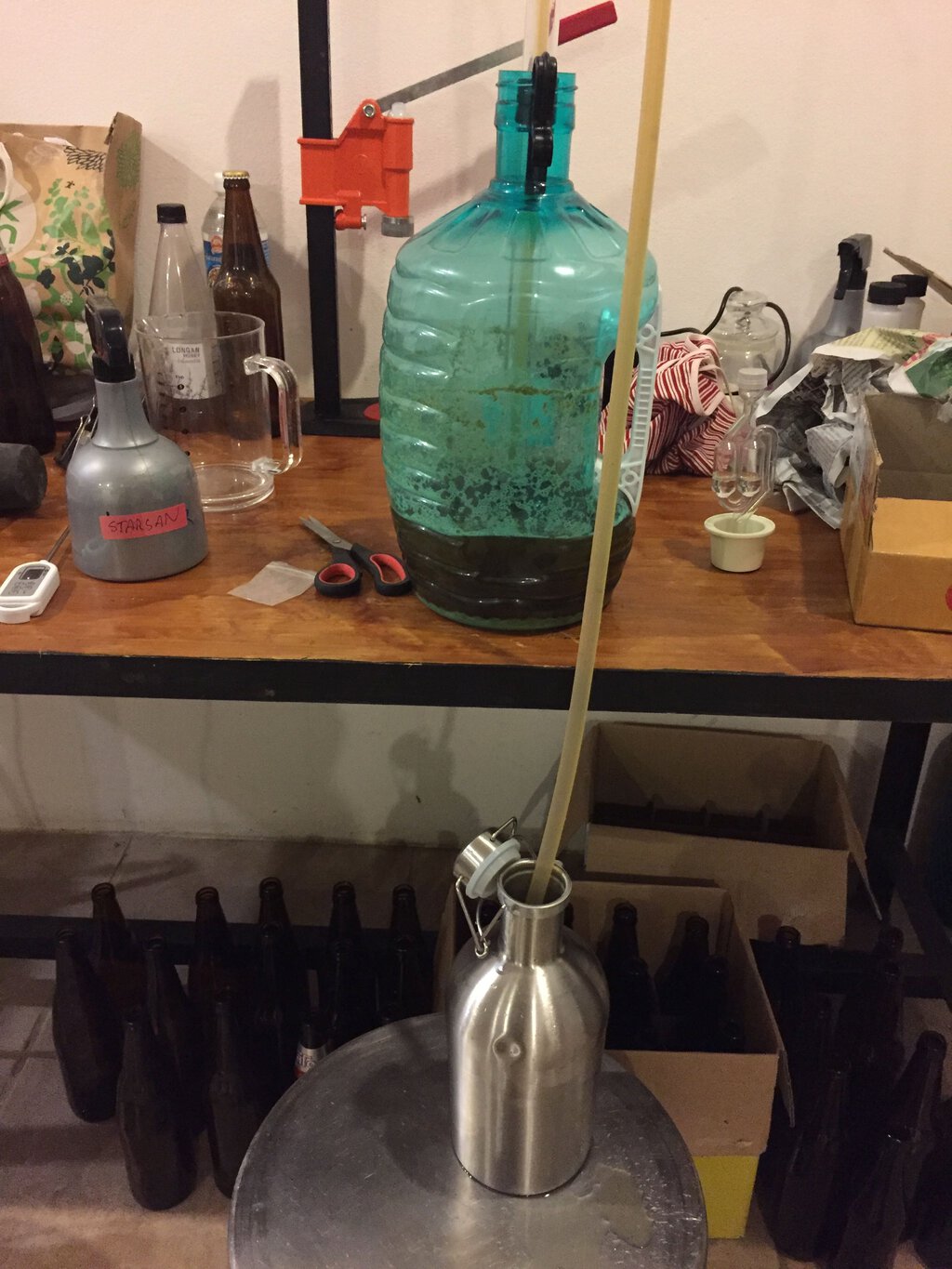 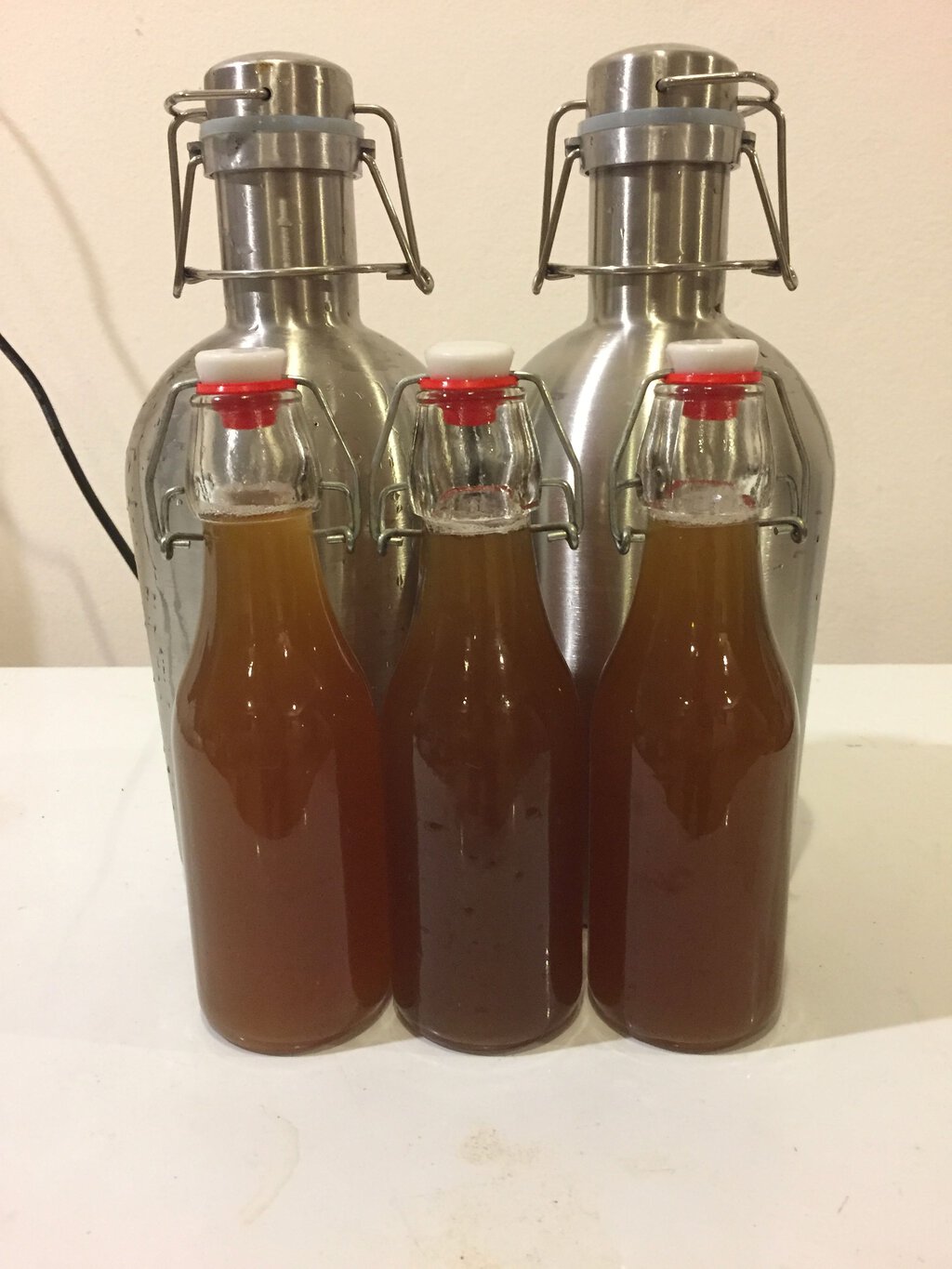 That was Tuesday. In the end, I let this ferment warm until Friday, when I chilled all the bottles. By Saturday afternoon, I poppped the swing-top on one. Carbonation was only low-medium. But the flavour was quite compelling and refreshing. Notes of honey sweeteness and salt came through the now crisper, sour base, and there was a bready but in no way burnt aroma. That bottle quenched a fermenter’s thirst. It didn’t last long.